Festivus has begun. I wasn't completely sure until I saw so many grievances being aired last night during the utter bullshit BCS show. I had come to accept the fact that we would be left out in the cold long before, but when I saw the matchups I really wanted to rain blows upon someone.

But I sense that we really need to move forward y'all. So this post is designed to be light, if not mildly entertaining and high in good things like sodium, random acts of curbside kindness and some trans fats. With all that being said...I don't like to brag, but...

When you have a birthday AND get your order in the Chick-Fil-A drive thru paid for by a hot cougar nice lady who has a clear, unobstructed rearview mirror, well...you know you're living right. Truthfully, I guess it's possible my mysterious lunch time "fan" was impressed as much by my Georgia vanity plate as my easy-on-the-eyes demeanor. After all, it was SEC Championship week and she couldn't have been a Tech grad, being a female and all. But hey, who're we kidding. The good Lord has blessed me with a lot more than a functioning keyboard and Blogger login credentials if you know what I mean.

And the dude at the window with the headset was just as taken aback as I was. Each time I insisted on paying him for my meal he just shook his head and said "She wants to provide you with a meal that's just as hot and made to order as you are."..."The lady in front of you already paid for your lunch sir."

What do you do at that point? Catch up to her car, force her to roll down the window and throw a wadded up $5 bill at her? Hire a private eye to check her license plate for any prior unsolicited acts of kindness? Get back in line so that you can pay it forward to that creepy guy in the royal blue Miata?

No, I just honked, waved and rushed home to tell the wife what had happened. After all, she needs to be reminded of the treasure that she has in her husband. I just wish I had ordered that peppermint chocolate chip milkshake. Mrs. Bernie loves those things.
Today's Ingredients
- So...did anyone have any more questions for Coach Richt?
- If you missed it earlier, the Huskers are already spitting kernels at us.
- Over at The Grit Tree Lugnut is working through the stages of disappointment like the rest of us.
- Nice to see Georgia fans aren't the only ones supporting Richt in defending his players.
- And if you're looking for a few rational thoughts on the "non-spike controversy", Chris Brown's write up is as thorough as they come.
- Surprisingly, Spurrier chimes in from his usual December armchair and disagrees with Richt.
- Groo has no regrets. But he does have a video of the team returning to hundreds of gracious students.
- The Lady Dawgs disposed of Tech on the hardwood yesterday.
- Have you "liked" the Herschel's Famous 34 Pub and Grill's BookFace page yet? If not, I urge you not to piss him off.
- Whoa. LA Tech thought there was a limo outside when they left the Independence Bowl at the alter.
- In the latest Curious Index, Run Home Jack might have an explanation for Bielema's recent weight gain.
- Lastly, isn't it about time the SEC seriously considered just seceding from the NCAA altogether? At least in football? Some of you lawyers out there need to work up a petition or something. That game in the Dome WAS the national championship game. At least in my mind.

So it's time to get the pole out of the crawl space. Festivus4theDawgNus is currently being prepped for its third annual run. AND THIS YEAR THERE'S AN ACTUAL PRIZE!!! No "fake donuts" this time around. Winner gets a bonafide Festivus t-shirt shipped right to your door. All you have to do is outscore everyone else at the table. More details will be forthcoming on Wednesday. For now, consider these rules carefully: 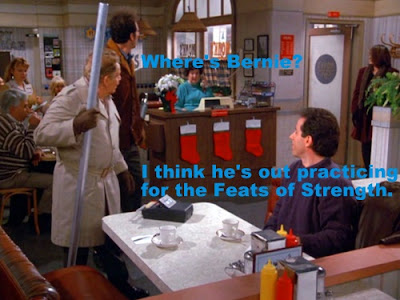 So come back in a couple days and we'll kick this thing off in earnest. The bowls may be loaded with stale, distasteful matchups but that doesn't mean we can't make the most of them.

Have a great week Reader. And if you're behind me at Chick-Fil-A one day soon and find the super awesome blogger in the car in front of you paid for you to Eat Mor Chikin, don't read too much into it.