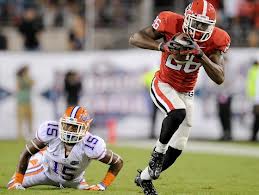 This past week over at DawgNation, Ching has featured his top five moments from the season. In order they were: 5) Jarvis takes over Missouri and Florida games, 4) defense turns Vols over, 3) Norman not fooled in Lexington, 2) Shawn Williams speaks out, changes course, and 1) Malcolm's catch and run in Jacksonville.

Of course, we've already looked at Connor Norman's huge play in comparing it to Gamble's forced fumble in '07. In my mind it saved the season just before Shawn Williams' helped turn it around. And while I can't think of a play/moment I would put ahead of what Ching has listed, I would definitely give honorable mention to Rambo's strip at the goal line early in the Tech game, Todd Gurley's 100 yard kickoff return against Buffalo and Rambo's sack in the Florida game (which is one of the greatest plays I've seen in terms of sheer enjoyment value).

However, in the end I nod in the same direction as Ching. Mitchell's touchdown was both pivotal in terms of the game on the field as well as the season as a whole. It was a big throw by Murray, and it was a huge catch and run by #26. One I'll remember forever.
Hunker'd Down by Bernie at 6:17 AM