One of the best fake handoffs in the history of bootleggin'.

Email ThisBlogThis!Share to TwitterShare to FacebookShare to Pinterest
Dawg Tags: as seen on YouTube, HillBillys have tooth

The votes are in...Malcolm wins!

Terrific interview here. He's wearing his Evil Richt suit, but this is Casual Richt at his finest. Not only does he have to be the most unlucky patient back up quarterback, he also has to wait on Kathryn to find the ring during his proposal.


As the Thinking Bulldog says...#waiting.

Hunker'd Down by Bernie at 9:10 AM No comments:

GATArchives - Amp'd up to Wreck Tech

I remember going to a football camp in the late 1970's at Cedar Shoals High School. Coach Waters brought back some alumni to run the camp. I was working out at receiver with none other than Anthony Arnold. It was hot and almost time to break for lunch. Amp called my name and said I was to run a go route to the visiting sideline and look for the ball over my left shoulder. If I caught it, we went to the shade and cooled off. If I missed it he'd call another camper to do what I couldn't.


I caught it. It was a glorious moment for a ten year old. But nothing like the glory number 82 must've felt 'tween the hedges a couple years earlier.


It might have been a game for the spectator, but it was a win for the Dawgs. A lot of heroes, guys that looked at a 20-0 deficit and stood ready for the task at hand. The Bulldogs' record improved to 9-1-1 on the season before a trip to the Bluebonnet Bowl.


Some bonus material related to this game:
- Garbin takes us back to meet the guy that caught the game clinching interception, David Archer.
- And he also breaks down Arnold's career a little further.
- A quick Hometown Hero piece from the ABH several years ago.
Hunker'd Down by Bernie at 5:28 AM No comments:

The head coach sits down with Chris Fowler to discuss Penn State trolling, running backs, discipline, Malcolm Mitchell and the upcoming season as a whole.

CLICK HERE
Hunker'd Down by Bernie at 6:13 AM No comments:

"Sometimes it doesn't always work for a ninja." Indeed.

Update - he even had a show down with a black belt on the Jerry Springer show.

As athletic departments across the country reassess and perform their own "gut-checks", it occurs to me that few are in the predicament that Penn State found themselves in when Sandusky's terror games began to surface.

While the perpetrator in Happy Valley was an assistant coach, the chief co-conspirator was a head coach so revered his words and actions were beyond reproach. Both men had time on their sides. They had been at PSU long before their administrators, as well as before most of the current students' parents were old enough to vote. This certainly helped facilitate and cover up the madness that was going on within the football program.

That kind of tenure is lost in today's "win NOW" culture. Joe Paterno began at Penn State in 1950 as an assistant and took over head coaching duties in '65. At the same time Sandusky was finishing his playing career and assimilated into his coach's staff. The only current coaches that come close to that kind of tenure are VA Tech's Frank Beamer who was hired in 1987 and Kansas State's Bill Snyder in 1989 (albeit with a brief hiatus from 2005-08). The next longest is Troy's Larry Blakeney in 1991, after that it jumps all the way to Mack Brown at Texas in 1998.

It's hard to imagine something of this magnitude and horror happening at another athletic department. And surely there were many other factors at work. As many programs check their own house for dry rot and cracks in the foundation, many will find a coach that is bigger than the institution itself. But gone are the days of time allowing these coaches to perpetuate this status over generations of matriculations.

Not to mention erecting statues before they're six feet under the gridiron.

Hunker'd Down by Bernie at 8:09 AM No comments:

The NCAA could've given Penn State an enema. Instead they went in for the full colectomy. It was ugly, and has an acrid odor.

If you enjoyed this morning's Dr. Mark Emmert show, riddle me this: did you get the feeling that this was happening at some distant institution? Is the impact similar to a California earthquake while your toes are dug into the red clay of the Georgia Piedmont region?

I have a lot of enemies in college athletics. Like many of you I despise Tech, hate Auburn and loathe the thought of reptiles. But I wouldn't wish what happened to Penn State this morning on any of them. Happy Valley was obliterated with a fate much worse than the death penalty.

The implications reach far beyond their campus however. Mark Emmert is a small town sheriff pretending to be a CIA operative and your local Baptist preacher all in one. If it looks a little awkward now, just wait a while.

On the morality meter, the Freeh Report exposed a slam dunk of a case. But what happens next? Does Bama get punished for giving Mike Price a credit card? Is TCU penalized for allowing players to minor in processing and distribution? When Coach Richt has to tell a recruit that UGA in fact does not have a scholarship for him, is that ethically ambiguous enough for Emmert and his small band of minions? Sounds like a stretch, sure. But the morality door is open now.

Indeed, what happens next? That's a question both Nittany Lion fans and any fan with their colors represented in their closet are asking today. Albeit from differing perspectives.

I want the healing process to begin.
I hope the NCAA sends the program
to hell to wait on its monster.

I hope the Happy Valley community
can step toward resurgence.
I'm eager to see blood.

I'm eager to see an end we can
somehow live with.
I need a pound of flesh.


This morning's news scares the hell out of me. Supposedly Penn State is in for "unprecedented penalties." Appropriate, sure. But that moral door is about to be wide the hell open. Scary precedent indeed.


Today's Ingredients
- Regardless, from what I read yesterday it sounds like the death penalty is off the table, which is good for the fans and players (ie. other innocent victims). But it sounds like it's going to be a fate worse than death.
- If PSU does get slammed, will some Nittany Lion castaways find solace with their old S&C coach, Mr. John Thomas?
- In case you didn't catch it earlier, PWD (and his brother) have some suggestions for PSU and th NCAA.
- Speaking of trouble with the NCAA, ecdawg finds what may be more trouble for Miami.
- Tyler found something other than the pictures in GQ to admire.
- It clearly lacks the sexiness and intrigue of scooters emerging from alleys, but Blutarsky finds that Coach Richt has clearly lost control in Chapel Hill and Blacksburg.
- Our old friend Ben Dukes reminds us that he'll be back soon enough.
- "By the time I was in 8th grade, I was set to go to Georgia." - Brice Ramsey on staying close to home.
- Harris English didn't just cross the pond for the fish and chips. Loran Smith brings us closer to this UGA golfer and budding star.
- Daugman has his impressions from a recent HoopDawgs' practice session.
- cocknfire simulated the first week of the season. Dawgs beat Chan Gailey's Buffalo Bills soundly, but some of the other results were surprising.
- Lastly, Adam finds a Bama toddler that has already passed Tuscaloosa's pre-requisite coursework.


We're 40 days out from kickoff. Which also means we're that close to tailgating as well. So Scott and his buddies have a great new cooker you might want to check out. 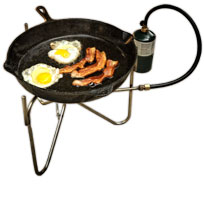 That thing might even cook a nice meatloaf. But don't take my word for it, check it out here. It's nice to be able to smell the tailgates again. Football is nearly here. But for the moment, we'll have to make due with today's lunch. Here's your fork Reader. Dig in.


Bernie
Hunker'd Down by Bernie at 5:28 AM No comments:

Paterno, down and out

Covered up. How fitting.

Hunker'd Down by Bernie at 8:38 AM No comments: