Aaron Murray and his team(s)

The University of Georgia hasn't been known to produce all-world quarterbacks. And that's despite the rise in the position we've seen while Richt has been the head coach and the legacy that an NFL quarterback like Fran Tarkenton produced. Still, you don't get into the esteemed air that UGA is in nationally and historically by starting warm bodies under center. Yesterday's post by Garbin really brings that point home. If you haven't read it, please take the time.

What Garbin does is break down the records for the Bulldogs' starters since 1973 with a fine tooth comb, as only he can really do, all the way down to a discrepancy with a Buck Belue start against Auburn in 1979. Wow. I began reading it to see where Aaron Murray stacks up against other signal callers that have worn the red and black. But the piece certainly takes you on a much deeper journey than that. (Personally, I began to remember all the debates we would have in Russell Hall in 1989/1990 about whether Preston Jones should start over Greg Talley. Good times.)

Great stuff indeed. But back to Murray, I decided to take what Garbin had dug up and put his current totals against next season's schedule. What follows is Garbin's table listing UGA's all time quarterbacks by winning percentage, preceded by a table I produced on a sticky note as I calculated/projected where Murray could end up. Feel free to correct any basic mathematical mistakes for me. 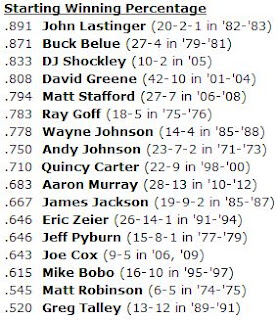 So even if Murray and the Dawgs went undefeated next season he would only surpass two other quarterbacks in team history in terms of winning percentage, good for 8th place all time. If the 2013 Dawgs "bottom out" at 8-5 then he'll only fall from 10th to a tie for 11th. So regardless, (at least in terms of winning percentage) he'll go down as one of Georgia's more average quarterbacks that also had a successful winning record.

I don't throw all this up on the wall to belittle our guy in any way. In fact, I think this goes against one of the biggest criticisms Murray gets. To win the big games you have to have the big teams. There's no question in my mind that Murray is a much better (NFL ready) quarterback than Belue and Lastinger. But the teams those guys played on were on a different level than the ones we've had since 2010. They were world beaters that continuously rose to the occasion.

The team Murray came back for his last year of eligibility to be a part of certainly aspires to be world beaters. Personally I'm not taking the woe is me approach to our 2013 defense that many are, and if our offense can stay healthy they could be one of Georgia's best ever.

So, can Murray lead them to the top? That remains to be seen. But looking at Garbin's list, I can tell you there is only one or maybe two I would even consider taking over Aaron Murray.
Hunker'd Down by Bernie at 5:15 AM