I trust you've read THIS. 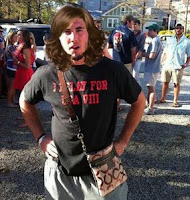 Earlier this evening, Aaron Murray held a press conference at the Butts-Mehre Heritage Hall on the campus of the University of Georgia. During the press conference, the veteran starting quarterback of the Georgia Bulldogs revealed some shocking news in light of the recent scandal involving Notre Dame Fighting Irish linebacker Manti Te'o: Aaron Murray actually has a dying girlfriend.

Quite honorable of Murray to carry on the way he has with a dying girlfriend in the background. And even more so to come to the public with this news before it got out of hand and became a distraction before the 2014 BCS Championship.

On an even more humorous somber note, you can follow Erin Murphy on Twitter as she supports her boyfriend one IV bag at a time - Dying4Heisman.
Hunker'd Down by Bernie at 1:01 PM