The prophet Lewis Grizzard once said, “Will we one day get all our news from a computerized version of a newspaper, or radio or television?” Given that Aaron Murray chose social media via a computer or handheld device to make his big announcement last night, I believe this furthers the argument that Mr. Grizzard was some sort of deep fried, buttered down, sweet tea Southern prophet.

There's a peacefulness that I end each and every day with as I bend over each of my darlings and kiss their little foreheads while they sleep. It's a moment that makes me feel young and old at the same time: young in that it gives me hope and warmth to end the long day and look forward to the next, and old in that their bed gets a little smaller each night that I creep in.


The best days are every day my friend. And so it's not lost on me that I used to start each day with some peacefulness as well. Before kids my world was much different, and the world as a whole was much different. A few weeks ago it was announced that yet another paper press would come to a halt. Forever. I'm not an avid reader of The Sporting News, but it seems like every week another newspaper ceases to exist, at least in its original form.

And when this news crosses my Twitter timeline, or is a small bullet on the side margin of a website I've navigated to, or reaches my electronic mail inbox somehow, I recall a time when I would start each day by walking to the end of the driveway, picking up the paper, retreating to a comfortable spot on my sofa, and reading it. I would start with the Sports section. And in the quiet of the early morning, before the world was graced with another sunrise and the only two people awake were myself and the delivery person, I would digest everything I both needed and wanted from this disposable news capsule. Then I would drive off to start my day with all of the knowledge I needed...until the next morning.

If the delivery person was late there was hell to pay. How dare the AJC force me to go into work less prepared to discuss these new fangled BCS standings than my colleagues. If I didn't know the latest names involved in the search to replace Steve Spurrier at Florida just because someone didn't double bag it on a rainy morning it was like going into the office half dressed. I felt vulnerable, exposed as an uninformed fraud.

Then slowly the news that hit the driveway was hours old before the words that echoed it were even printed. Eventually it became an easy decision to stop going through that motion each morning. The money we saved from canceling the subscription was probably used to fund half of our newborn's monthly diaper allowance. (Insert your own Atlanta Journal & Constipation joke there I guess.)


Part of this eventuality, this foreseeable certainty where every printed form of news goes the way of the dodo bird, gives me pause and forces me to reflect upon a simpler time. Especially during the holidays when I could turn on the Christmas tree and read about how my Dawgs had dismantled the Arkansas Razorbacks for the SEC Championship in the stillness of the early morning. But I'll trade that in for a quick check on the Twitter news feed and an opportunity to tuck my girls in any day.

The more things change, the older I get. And the closer their little toes get to the foot board.

- Could a Georgia quarterback transfer as a result of Murray returning for his senior season? Lady Sportswriter has an in depth look at where things are, and ecdawg also looks at the logjam at the position. 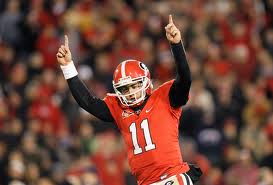 - hoopdawg looks at the hardwoord win over our nation's first president the other night.
- The Lady Dawgs couldn't withstand a second half surge up in Knoxville.
- Groo has a interesting (to say the least) look at where the running back situation stands today as opposed to last summer.
- Blutarsky wonders if the Big 12 is putting their playoff cart before the regular season horse.
- A lot of BCS stuff: Spencer Hall has a pictorial look at some Tuscaloosa SEC pride; Looks like Mr. Sanchez is watching tonight's college football season finale with Touchdown Jesus. Meanwhile, Tyler takes a look at the game with this preview.
- Most importantly, Kegs 'n Eggs has your 2013 BCS National Championship Drinking Game. Cheers y'all!
- True, hard to believe Chip Kelly turned down the NFL. But cocknfire points out the ways in which it is good for college football.
- Lastly, let this slip for a few weeks, but it is time to congratulate The Country Club at the Highlands for their work in kicking cancer's ass. If you're in the Richmond area you might be familiar with the VCU Massey Cancer Center. Good people, doing great things.

Is anything timeless any longer? If newspapers can stop pressing, is there anything that can't fall victim to Time's persistence?  As Gollum once riddled Bilbo:

It is the conqueror of all. We all have felt that adolescent feeling of invincibility at a period in our development. Hell, I still feel it from time to time: my hair will never turn gray...oops!...I can play a game of two hand touch with the kids without spraining something...ouch!...Tech never beats Georgia...(waiting...) Well there was that time Jasper's knee was down so they cheated...

But I digress. All good things must come to an end. Whether it is the day as I place that kiss on their foreheads, or a Georgia football season that seemed lost but then was found. We just keep plodding through this thing called life. You can find me there anytime, right in between that bowl of buttered grits and that next glass of sweet tea. Just as our prophet once predicted.

Have a Monday Reader! And don't let Touchdown Jesus keep you up too late. Because news will break early tomorrow (probably via social media) that Saban is taking Frumpy's place. You don't want to miss that!