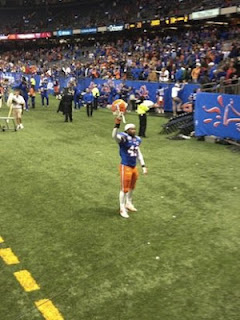 Aside from my deep rooted hate for all things gator, this little story and picture is what is great about college football. A seldom used junior joining his school's band one last time on the field after a game. (edit: closer inspection, appears Kitchens is a junior)

Junior linebacker Darrin Kitchens ran over to the band section, held his helmet high and proudly sang the fight song. It didn’t matter that he was the only one standing alone while his other teammates ignored his gesture.
According to the participation report, Kitchens never played in the game. Yet he seemed to savor this final moment and I'm sure the band appreciated his participation.

I'd probably want to bash Kitchens' teammates for not joining him, but I also understand wanting to get off the field quickly following what happened against Louisville. And somehow it just makes the story better that despite the way the game played out, this player decided to enjoy his last moment of the 2012 season doing something he loved most about it.

**stole this from JaxDawg's timeline. He's a good one to follow if you're on the twitter.
Hunker'd Down by Bernie at 8:37 AM

Thanks for the nod, Bernie. Go Dawgs!

As much as I hate the Gata Nation..this kid showed what class and college football is all about.

Kid is a credit to his school and what is good about college football.