Wednesday thoughts on shucking the Huskers

That was a great game. I admit it was much closer than I thought it would be. Nebraska may not be their old man football selves, but they are a gritty team that fought hard after a humiliating loss in their championship game. Here's some other thoughts on the 45-31 win. 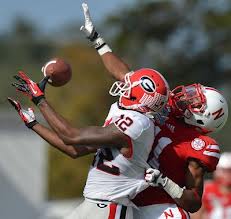 I might look more closely at that one day when I settle in and watch the replay. Unfortunately, I've got nearly nine months to do that. Sigh. Overall, you have to look at the Capital One Bowl as a nice end to a great season - 12 wins is something not many teams can claim. The focus for the off season will be on which (if any) underclassmen decide to stick around, how the 2013 signing class shapes up and the buildup towards what should be a difficult early test in Clemson and South Carolina to start next season.

But as you turn your attention in those directions, be sure and take a few moments to appreciate what this team accomplished. I know that I will.
Hunker'd Down by Bernie at 7:22 AM