Whoa. If you know me, I neither embrace nor loathe following college recruiting. It interests me. No, it intrigues me. But about 60% of it is just really damn annoying.

But what broke and what happened yesterday is part of the reason recruiting is fascinating. Dee Liner is one of the top overall players in the 2013 class. There had been little interest between him and Georgia coaches at all. 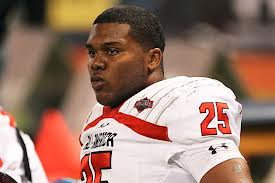 That has all changed, completely.

To summarize, Liner (a top defensive tackle, formerly committed to Auburn and until recently believed to be in Saban's back pocket) of Muscle Shoals AL has reached out to Georgia coaches. He had to hunt down a new phone number since Garner isn't around anymore, but once he found one the flirtations began. It reached a crescendo yesterday because Coach Richt, Grantham and new defensive line coach Chris Wilson flew out to see Liner in northwest Alabama. Now Liner is taking an official visit to Athens this weekend.

The end result is there is both much excitement and much confusion. Liner's interest draws into question all manner of once possible scenarios. But I think it's best if we focus on these points:

In short, it appears our list of targets is this: Laremy Tunsil, Montravius Adams, Davin Bellamy, Alvin Kamara, Reuben Foster and Dee Liner, . The coaches are going for the deep ball. Don't get caught biting on the pump fake. It'll be a touchdown, or an incompletion.
Hunker'd Down by Bernie at 5:02 AM