When you least expect it....expect it!

Surprising because last we heard, he and Georgia had cooled off completely. Just last week when Radi Nabulsi sat down with us here he said that Georgia coaches' recruitment of Johnson was done. 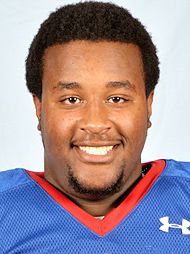 There was a lot of buzz late in the day on signing day about a late signee. Any updates along that front?
Toby Johnson had contacted the coaches about dropping his final official visits and signing with Georgia.  But he changed his mind apparently. Georgia had moved on from him earlier in January after it became apparent he was going to have trouble qualifying but after missing on some top targets, Georgia had room to take a chance. I do not think Georgia is actively recruiting him now.

Something changed. And it might be his academic prospects. It never appeared as if Georgia was shying away due to a knee injury Johnson's rehabbing. They've always recruited him to play immediately. And now it appears as if Johnson will enroll in June and be ready to do just that.

And it also appears as if we have new defensive line coach Chris Wilson to thank for the final signee of the 2013 class.


As weeks passed, however, some thought Georgia -- a program Johnson considered a longtime leader -- was looking more like a dark horse candidate while Auburn and Mississippi State were front-runners.

But Georgia seemed to creep back in the picture when Chris Wilson left Mississippi State to take a defensive line position with Georgia.

"I liked Coach Wilson when he was at Mississippi State," Johnson told ESPN's DawgNation in January. "I think he can make me better each and every day. He can make me versatile and help me get to the next level."

Indeed. Welcome Toby!
Hunker'd Down by Bernie at 6:59 AM