Clempson: next game in an old rivalry

Recently I was asked...


Other than Herschel, who is your favorite Bulldog and why?

Scott Woerner. Although I grew up in Athens, I was raised in a Clemson household. Dad often took me to their games when I was young to show off his alma mater. But Woerner single-handedly beat Clemson in 1980, returning a punt 68 yards for a touchdown and an interception 98 yards to set up another score. He's the player I've looked up to the longest as a fan of college football. I love to watch my dad twitch uncomfortably in his seat when I simply mention Woerner's name. Number 19 played with skill, smarts and a ton of heart. Damn Good Dawg!* 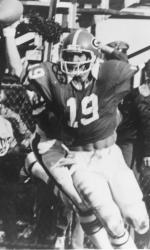 Tuesday's news really got me amp'd up to tell you the truth. I'm excited that the opener is a nationally televised contest. But we pretty much expected that with two teams that will be highly ranked, most likely. Still, it was like a rich echo in the cavernous valley of the off season, chanting my name and telling me that college football will be back soon. (soon...soon...soon...)

Of course the reality is that it is still 176 (??...I think) days away. But I'm probably as excited for this opener as any other in recent memory. Playing Clemson means playing against family. Nearly my entire immediate family lives up there. I made my parents sign a four page contract before they could have my daughter there for the weekend, unattended. To this day there are still pictures floating around somewhere that my lawyer has yet to successfully subpoena. I'm sure of it.

Yes, this rivalry is deep rooted. Although I grew up within minutes of Vince Dooley's house on Milledge Circle, it was Clemson games blasting from the radio on Saturday afternoons as dad worked in the garage or in the back yard. Of course Munson's voice found its way through the house as well.

Which is why this is so big for me. And why I'm already so excited. More so than usual. Are you with me? Of course you are. Let's go touch that rock and GATA!

*Many thanks to the folks at BulldawgIllustrated for the acknowledgement.
Hunker'd Down by Bernie at 6:47 AM