How long has it been since Coach Richt has mentioned not having an indoor facility? Years right? In fact, ever since the new Butts-Mehre expansion was completed I have heard nary a word.

But there's evidence that although he may have lost the battle for a full fledged indoor practice field, Richt still has eyes on winning the war. And when you're Evil Richt, with or without a goatee, you have your field generals do the dirty work. 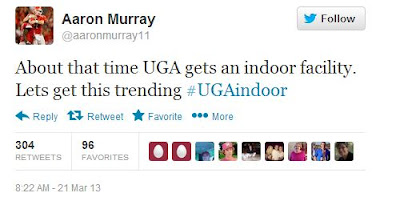 No doubt that Coach T has long served to carry out Richt's evil doings. But after participating in a public video where the S&C coach was seen dancing of all things, obviously his rank has suffered a demotion. Ben "turf eater" Jones ain't in town. Fabris is chewing glass on Rocky Flop as a basketball coach of all things. So now that the brand spanking new indoor facility ain't quite so brand spanking anymore, Evil Richt taps the helmet on his famed signal caller. The guy with even more followers than SEC passing yardage.

More importantly, Damon Evans isn't around to fight this off any longer. Where's AD McGarity stand on this i$$ue? My guess would be against dumping money into a newly constructed yet oft abandoned building and more for saving the money for something worthwhile.

I mean wouldn't we get more bang for the buck in hiring minions like the ones Saban uses to spread destruction across the vast college football landscape? Instead of getting them to tweet.

Anyway, back to Murray. Why do I think this is Evil Richt at work? Well, what does Murray stand to gain from UGA building an IPF right now? It's not going to be completed before our potential next indoor tackle football game...which is...let me see...oh yeh, potentially December 7th. Potentially.

No, I think Murray enjoyed his time inside Everest Training Center last week instead of on a beach somewhere getting skin disease and had a conversation with his head coach that went something like this:


AM: Hey Coach. Had a great time with Coach Whitfield last week. That Oklahoma indoor facility is boss!

ER: Really. That's great kid. Get out your phone, open that Twizzer doohickie and hand it to me...