We stepped up to the registration desk and I could sense her uneasiness. I've only known her for eight years and 55 weeks, but I know she tenses up in new situations. Especially ones with new faces in new places; surely a character trait I evidently passed down to her. So I put my hand reassuringly on her shoulder, the way a dad does when he knows his kid is the least bit uneasy, and I wondered if she picked up my uneasiness as well.

Months of negotiating had lead us to this point. Of course all of the discussion about playing football had been in private, for the most part. She kept insisting on tackling somebody. And I kept insisting she start with flags on her hips.

It's not that I'm afraid of pads on her shoulders. She can hold her own, trust me. It's just that flags seems the reasonable and logical step. When I first offered that a trail had already been blazed for female place kickers she insisted that she'd be a "quarterbacker" or a linebacker at UGA instead. I quickly recalled it is not in a father's best interest to sell his own daughter short. Ashamed, I quickly told her she could be anything she wants to be, a phrase she and her sister hear about every day from their mother and myself. After all, we'd much rather them reach for the stars than the storm clouds underneath.

So there we were, a year and a half later. Me standing by my promise and her standing at the desk where we knew the question would be raised. I cringed before he even asked. "Okay young lady, are you here for cheerleading?.....(long pregnant pause as the jersey and cleats she's wearing catches up to him)...or flag football?"

"She's here for football," I announced, louder than I had anticipated.

The rest was easy; even easier than the countless minutes of catch in the backyard, the neighborhood games and even the indoor Madden '13 matchups. Yes, as expected, she let her arm and her legs and her knowledge of the game do the talking once we were out on the field. Her pass had a tighter spiral than any of the coaches. Her routes were confident and sharp. She didn't like the cone drill because she didn't get to run it with a ball in her hands - "What's the point of that Dad?" But by the end she had made her point.

Should this experience prove too little of a challenge, I won't push her to continue if she doesn't want to. Just like I won't lower the bar because she's a girl. As far as I'm concerned the most important step is already behind us. And we took it together. Nothing against cheerleading, but she does enough of that on fall Saturdays.

Proud to be her daddy. Her mother, sister and I are pretty sure she will be the best one on the field. Regardless, I have already proven to her that while the world stands and waits for their opportunity to believe in her, I'm already at the front of the line.

Today's Ingredients
- MARCH MADNESS IS HERE!!!!!1 And we're not in it.
- But Tyler has the pool heated up. And here's a link to Kerri's #FBWD pool for you tweeps. Password is "Twittah".
- Hoop Dawg has a season wrap up in a lot more words than I can express.
- And Daugman sums up my thoughts exactly on our early exit from Nashvegas.
- Greg has some communication he'd like to impart, from the line of scrimmage.
- From Blutarsky: Animal husbandry. Cousin lovin'. SEC nuptials. Sometimes they're closer than you think. Maybe that explains WarDamnTiglesmen.
- Dawg Haus looks at the 1984 clash 'tween the hedges of Georgia and Clempson.
- Meanwhile, Kimberly wonders who ya got for the season opener.
- The GymDogs finished the regular season with an impressive road mark.
- Diamond Dawgs...swept out of College Station.
- And the Men's Tennis team took care of the Gamecocks yesterday in Athens.
- Lastly, in case you missed it, make sure you craft beer drinkers catch my talk with Kevin at College Football Zealots. We even sneak in a little spring football talk.

So how was your St. Patrick's Day? Did you end up face down?... in a pool of your own green vomit?...in the middle of Savannah?...with nothing on but a ratty pair of green silk boxers?...three sizes too small?...

I didn't. I mean there were some moments when I guess it was touch and go. I did attend a beer fest after all. And spent a good part of yesterday comparing and contrasting Irish brewing techniques. The products of those techniques that is.

But I think the highlight was eating most of the weekend's meals outside on the patio with the family. There's just something about getting back to nature after being frozen over by these harsh Georgia winters. Like I said Friday... 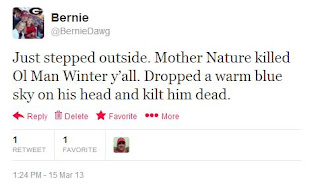 Y'all have a great Monday. And rest assured I'll let you know when my daughter is signing autographs. Until then, here's your fork. Go on and get after it!