The ball's in Fox's court

Gonna give you three numbers: 4, 31 and 43. Year four, thirty-one wins and forty-three losses. So after Coach Fox's fourth season we've compiled a sub .500 record (in the SEC, including conference tournament; also, please see addendum below about conference record compilation). 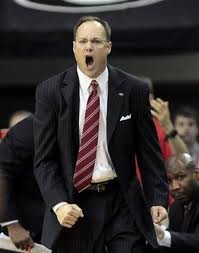 Is this acceptable? No. And I would presume that's the answer you'd get from just about everybody, including Coach Fox himself. But like a road trip that has for one reason or another veered off course, this is where we are. Which is probably why this is one of those posts I've written about twelve times and deleted eleven of those.

So I'm just going to throw it out there. Can Fox get us there? "There" being in the hunt for Sweet Sixteens, Final Fours and SEC banners?

In the last four years Fox has proven to me that he can coach on par or better with every other head guy in the league. What separates the others from our stagnant place closer to the bowels is the talent he's bringing in, more specifically the talent he's not able to bring in. We had one player mentioned among the SEC elite for the season. Florida had five. That's the difference between first in the standings and ninth; the difference between 14-4 and 9-9.

Something has to change or we can just continue to get used celebrating individual player achievements.

Addendum: I found numerous errors in Fox's SEC record. For example, on the official website it has our 2010 SEC tourney record as 2-0. That of course isn't possible. Further digging reminded me that we were 1-1 with a loss to Vandy in the second round in that tournament. So all that to say that the record I've compiled above is the best I can come up with using multiple sites, the most accurate of which I believe is SicEmDawgs.com.
Hunker'd Down by Bernie at 6:48 AM