It's Bama or Georgia for Dante Sawyer 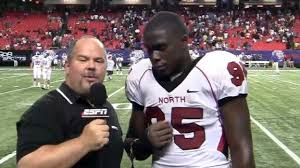 Nabulsi tells us the defensive end from Suwanee GA has narrowed ($) his list down to the Crimson Tide and the Dawgs. Sawyer is considered the seventh best DE in the country and visited Athens most recently for GDay. Until then Alabama was considered his top choice. Now it seems to be even.


“I am going to decide in the next two to three weeks,” Sawyer said, “I am not sure which one I am going to pick, but it is down to Alabama and Georgia.”

And momma might be the tiebreaker as he plans to make his next visit(s) with her before he decides in the next few weeks. So put on that winning smile and those dancing shoes Coach Richt. Glad the hip is feeling better.
Hunker'd Down by Bernie at 6:52 AM