Biggest challenges on the 2013 schedule 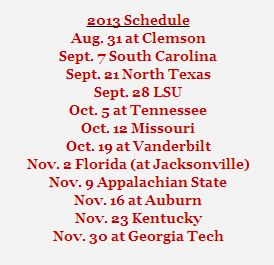 So yesterday we looked at the most important games for this fall. But that doesn't necessarily mean those were the most difficult games on the schedule. Of course, it's hard to foresee just how good some of these teams will be. For instance, Mettenberger could have a renaissance year under a new coordinator. Also, there could be key injuries, suspensions or even weather that impacts how a game develops.

But again, this is an alternate exercise to twiddling your thumbs. So here we go.


I doubt it's the Rattlers. I took a flyer on that one. Is it August yet?
Hunker'd Down by Bernie at 4:59 AM