(Second of two posts. Part one is HERE.)

So in the last eight signing classes, Coach Richt has brought in 25 of the state's best 80 players. That's 31%, even without Jarvis Jones who eventually wound up in Athens. Perhaps he should count as two himself. The most productive year on this abbreviated list is clearly 2006. Georgia was coming off its second SEC championship since those guys had started high school and Mark Richt had clearly elevated the program into national discussions as well as dinner discussions around the state of Georgia. 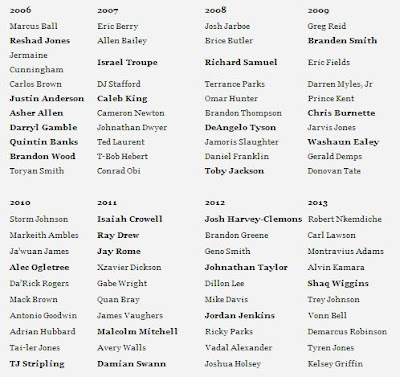 Just in terms of recruiting however, perhaps 2011 was the best year. Coming off a dismal 6-7 season, Richt was answering questions about his job at the same time that he was putting together a "Dream Team". Certainly Crowell was both the cherry on top as well as the biggest disappointment. Still, Malcolm Mitchell and Damian Swann are clear starters and All-SEC caliber players while Ray Drew and Jay Rome could certainly break out this season.

But back to Crowell for a minute. In terms of production at a level commiserate with the recruiting stars, how many others like him are on that list? Hard to see that completely, but we certainly didn't miss out on the likes of Daniel Franklin who never started a game for the Sooners or Josh Jarboe who never really started his career there before getting kicked off the team.

And that is what begs the question: is the talent eluding Richt or is some of the talent not worth the paper the scholarship is written on to begin with? I look at that list and remember the disappointment in losing some of them like Ju'wuan James who we clearly could've used. Hell, what might have been if we'd had someone like Johnathan Dwyer in the backfield after Knowshon left?

No, I think the problem is with us - the fans. I'm sure Richt looks at that list and remembers a number of ones that got away. But that's the nature of recruiting now. Teams are on television a minimum of three days each week each fall. There's constant exposure that state lines cannot possibly keep out like they used to, back in the days before ESPN had daily coverage and South Carolina was playing on Thursday nights of all things. For instance, Conrad Obi's decision to go all the way to Colorado was made even easier by the fact that nowadays the world is much smaller and can be manipulated with just a mouse and a keyboard, or a handheld device. Years ago Obi would've had to wait for a mail carrier to come all the way to Grayson GA with the requested information about the University of Colorado and what the campus had to offer. Instead, he could just point and click and get the information he needed instantaneously. Boulder became a neighboring destination as much as Athens was in actuality.

We have to recognize that as much as coaches do. Questions about how much access to airplanes and gas cards and game film our coaches have are legitimate. Blaming them for losing players that would rather play elsewhere is not. Questions about signing another offensive lineman as opposed to a diminutive running back ill-equipped for Division I football are perfectly pertinent by my estimation. Gnashing our teeth about how we're going to keep these Georgia kids from signing with Saban when we were within an eyelash of beating him on the actual field are not.

Of course, Richt admitting that he recruited Cam Newton as a tight end is hard to fathom. And there were a fair share of "lucky losses" on that list like Da'Rick Rogers and Markeith Ambles. Additionally, 31% may seem awfully low for a program that's been as successful as it has under Richt in a state where he should have his pick of the litter. But again, recruiting has expanded exponentially as much in resources available to coaches as it has in coverage and premium subscriptions doled out for daily updates. Even coaches from fertile recruiting grounds such as Georgia have to get used to recruiting against programs far and wide as well as visiting destinations unknown by their predecessors. Dooley never had to recruit a quarterback from Dallas. Richt would've been admonished had he not pressed hard for Matthew Stafford. Understandably so.

And while that might sound like more work (and it is), it also gives Richt's staff the luxury of passing on a certain kid if they believe he's not a good fit; on the field, off of it or both. And given the way UGA manages its roster compared to say Alabama, Richt has to be more discriminating when it comes to offering and then catering to these high school celebrities. It's akin to the difference between asking a girl on a date as opposed to marrying you. With one, if it doesn't work out, only one party gets hurt. While with the other there is much more energy and time spent on the relationship and its status.

To close, it's true that some of the top talent in the state of Georgia is eluding Richt. But it is only fair to say that he is also eluding some of the baggage that comes with it. Maybe you're like me and remember tuning into some livestream radio coverage of Greg Reid's announcement prior to the 2009 signing day. The picture in my mind was of a local talent about to make one big time college program happy. A kid with top level speed who was projected for great things at the college of his choice was also about to disappoint a couple other programs. Not to mention thousands of fans overloading the small town radio's server.

Four years removed, would we be glad to have had Greg Reid in Athens? The same five star defensive back that ran afoul of FSU rules and the law in general too many times, so much so that he was finally dismissed before his senior season? Perhaps he would've thrived in a different environment. Maybe. Hard to say. There are too many variables to factor in and answer that question soundly. But that's where we are these days with recruiting. In state players leave. Some of those go on to disappoint you and some make you glad they chose a different hat. As fans, we need to evaluate the Georgia football program as a whole based more on actual team results and less on how many players didn't take to Richt's message.
Hunker'd Down by Bernie at 9:01 AM