New poll: Eight or Nine games, that is the question.

A week ago people got pretty excited about the thought of opening the 2016 season against Florida State in the Georgia Dome. I'll admit, the blood pumped a little faster for a moment. But scheduling games like that are even more problematic than they used to be because of all the variables involved. A school has to consider it's existing schedule and its inherent, perceived strength, the implications of said strength of schedule on possible post-season opportunities, whether a home game would be lost because of a neutral site matchup, and then money. It always leads back to money. 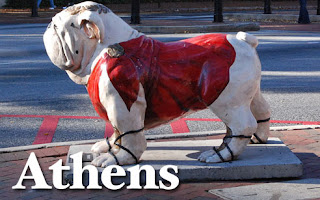 If the SEC eventually goes to a nine game schedule these games could all but disappear. McGarity has been outspoken (as he should be) about keeping a seven game home schedule. Even if the Chick-Fil-A folks made the offer of playing in the Dome as lucrative as possible (something the city of Jacksonville has had to do in the past to keep the WLOCP where it should be), it would still mean the city of Athens would lose thousands of dollars in potential revenue.

As someone who grew up in the city of Athens, that means something to me. The Loco's on Harris St. closed last Sunday. Weaver D's and Peaches faced a similar fate. Neither were directly related to the football schedule, of course. But if you went to school and/or grew up in Athens undoubtedly you can list off several businesses that enjoy the influx of gameday traffic.

All that to say, I'm all for keeping as many home games on the schedule as possible. And I'd also like the opportunity to travel the SEC more. A nine game schedule gives us trips to The Grove, Baton Rouge, Tuscaloosa more of than a blue moon comes around. I would even consider giving up the yearly tie in with Auburn if it made things easier. I'm not yet willing to let go of the Tech "rivalry" just yet. But there are those that are well past that point.

A lot to consider for sure. But at this point it's safe to break it into two categories to determine which side of the fence you are on: eight games with more cupcakes, or nine with more SEC variety. Where do you stand?
Hunker'd Down by Bernie at 10:03 AM