Monday's Meatloaf - of hop pellets and a lead foot 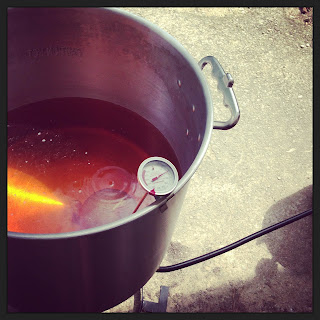 Until yesterday my memory of homebrewing went a lot like this: walk into obscure mid-1990's brew supply store, walk past all the wine-making crap to the back corner, grab some ingredients according to a recipe I found on the internet in a book mom had given me for Christmas, get really excited, convert the kitchen into a sticky mess, listen to the wife complain about the smell while you smile uncontrollably at the thought of all that Miller Lite you're not going to have to drink now, finish the batch and laboriously bottle it all up, then come to the realization that although it's better than a Coors Banquet beer, it's still not close to what I had anticipated in the back corner of the mid-1990's brew supply store.

Rinse with sterilization solution and repeat.

Yes, until yesterday. Sunday July 14th the inaugural batch of Beaver Dawg Brew boiled to perfection. And while it did so, Nama, Cord and myself were able to drink really good beer...and talk about football...and grill meat...and drunkenly discuss the intricacies of the George Zimmerman case...and drink really good beer...and talk about the recipe Cord found on the internets...and eat grilled meats...and plan out the fermentation process.

I'm sorry your tailgate this fall won't be nearly as hoppy as ours Reader. But if you stumble by maybe we'll give you a taste. Cheers!

Today's Ingredients
- Another successful Dawg Night is in the books. And Dyshon Sims' commitment is the talk of the town.
- Speaking of Sims, Blutarsky recaps why Saban will have to use a cellular device to sell his one year plan to the St. Pete prospect.
- DavetheDawg evaluates the current class of commits and asks you what position would best round it out.
- Tyler has a theory as to why UGA is not preparing billboards touting Murray for Heisman. Have to say I agree. Individual attention is the last thing our quarterback wants. Or needs. All good things...
- As Manziel was nursing his acute illness massive hangover this weekend, I couldn't help but wonder how his erratic behavior will affect the sports betting odds in A&M games this fall. Will people lose confidence in his ability to lead on the field?
- Confession: I didn't watch that shark movie y'all. But LSUFreek makes me wish I had.
- With Media Days looming this week, Paschall tells us the focus is not on the rear view.
- Hey look, I made the #NoleNationDraft!! (h/t Hale)
- Lastly, this was a great read by Weiszer on the current landscape for gay athletes, both at UGA and across the country.

It was great meeting you along highway 64 a couple weeks ago. I apologize for arriving at your speed trap so hastily. The family was eager to get to the beach and the pressure was sitting squarely on my shoulders. Or the gas pedal under my right flip flop as the case may be.

We had a chance to meet so many nice people while in your neck of the woods. I wish you had the same opportunity. No, really I do.

There was the gentleman in the tank top using his knees to steer his Dodge Ram while he used his two thumbs to text his buddy. Undoubtedly it was something of vital importance, such as how much Coors Light he had consumed in the 7-11 parking lot. Or perhaps to ask which finger he'd blow off with an M-80 the next night during their Fourth of July celebration. I'm just glad we didn't allow our car to interfere with the weaving of his truck, and the trailer he was using to haul his jet skis. And his Coors Light. And his

Then there was the gal holding a cigarette with her left hand while scratching off her lottery tickets with her right. I'm no math major Officer Myers, but I believe that leaves her with less than one hands to steer her Expedition as she weaved in between cars. You would've loved to meet her...assuming you could've forced your vehicle up to a speed fast enough to catch up to her. Word of caution, watch out for flying butts. And used cigarettes.

Anyway. I hope my transgression didn't ruin your July 4th holiday. After you served me with my summons and we parted ways, suddenly my daughters were quite adept at shouting out the speed limit changes from the back seat. If they had only found the time to assist 30 minutes before you asked me to roll down my window we would've never met.

And I'd be a couple hundred dollars richer. Perhaps that nice lady could loan me some cash from her scratch off winnings.

Sincerely,
Bernie, the guy in the UGA cap
Hunker'd Down by Bernie at 9:53 AM