I am not superstitious. I'm not. But I'm also a "if it ain't broke, leave the wrench in the tool bag" kinda guy. And you know what worked in 2003?


That red speck, that miniscule Georgia red pixel in the background is me sitting in a sea of orange. I remember how fast Gibson ran away from me (and the defensive back) and that I was the only one in my section that seemed excited about it. To stand amid a sea of indifference as the lone voice of reason is an intoxicating feeling. Am I right?

That's funny because it's pitiful. Plus, I think it was the one play Pollack sat out. Regardless, tomorrow I'll be sitting in the same section. Not because I'm superstitious. But because it's the only ticket I could get that's what Dawgs do on the road. Get in the stadium and cheer their gotdamn head off!

Ok, now let's play...what does Bernie not give a shit about?

First, excuses. I do not fairly give a shit that our defense is young. Our defense last year sucked, bottom line. Do y'all want them back, with their one eye on Mel Kiper's pen and the other on the sideline to see if they can sit this play out? They were a series of fits and starts that couldn't stop the runs with a handful of Imodium and a bath plug. Don't sell these new guys short just because they haven't started many games. They're not an excuse, they're our opportunity to prove Georgia Bulldogs defense is better than 2012. They're my guys. They're yours too.

I also don't give a shit about where Gameday is. Some of y'all are a little too obsessed with Kirk's highlights. It's gotten more than awkward. If they wanna come watch me tailgate, sobeit. But fretting over our record while they're on the same campus is weak sauce. It's August hoss. Put your big boy britches on. Let em dress like clowns. 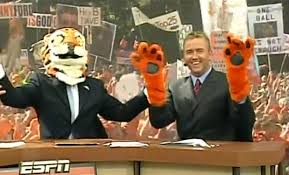 Fourth. Passing the football. RUN. THE. DAMN. BALL. Forever. Then turn around and RUN. IT. BACK.

And last, anything in the world other than this: 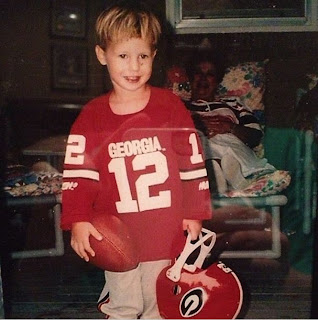 If that alone doesn't get your Georgia Red blood pumping a little faster, then I do not know you sir. And I do not care to either.

Back to the defense to close this thing out. I have it on good authority that they've been told the story of Mambogook. If you're not familiar with this tale of Georgia Bulldog football lore, I'll find a moment to relay it to you before kickoff. My point is this: They'll be ready. And unlike 2012, they'll also be hungry.

So stop your fretting over their over-hyped offense. Ease off the ledge. Take my hand and trust in this. We have Gurley. They don't. We have history on our side. They don't. We have a coach that is treating this as a business trip and not a pre-season scrimmage. They don't. It's not a "one-all, end-all deal". Right Dabo? You always wanted a spring game with Dawgs. Well, you better wear your cup tomorrow son. You're getting that and more.

To quote the man himself: "This is the gameplan. We have no alternate plan." See y'all in Clemson. Stick a fork in the off season. Real football is here!
Hunker'd Down by Bernie at 8:09 AM