The next freshman sensation?

Given yesterday's look back at Gurley and Marshall, it's time to speculate and prognosticate. We've seen enough headlines and quotations from camp thus far to make an educated guess on which newcomer will make a Gurleyesque impact this fall. 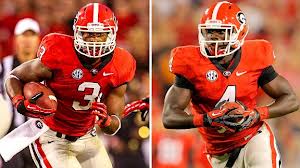 But first, some guidelines. I plan to use these. And although you are under no such obligation, they do help tie the posts together.

I think that'll do. After all, I already have my choice, which I'll post tomorrow morning. Did I miss a qualification? Care to provide your own guess as to which newcomer will drop jaws and crush opponents this fall?
Hunker'd Down by Bernie at 4:48 AM