There are two things that give me great pause going into this SEC opener: USC tailback Mike Davis and the Gamecocks' defensive front. We looked at slowing Davis down yesterday. How will the Dawgs address protecting Murray?

Well, it's looking more and more like Xzavier Ward will play sometime soon ($). And while that might not mean as soon as Saturday, it remains a possibility. This is welcome news, but we should take it with some caution. Doesn't sound like he'll be ready for a full workload anytime soon either. Coaches will continue to be careful with the sophomore offensive tackle's knee which has been problematic since he signed with Georgia.

But I'm sure we might see some extra-jumbo sets. Ward has been working at left tackle mostly. Earlier this week Richt stood by Kenarious Gates at that position. Houston has been moved everywhere but center. Theus is accepting his role as a backup. It sounds like chaos, but is it controlled chaos?

Teams that have been successful against this defensive line have had a tackle that was able to (at least somewhat) neutralize Clowney. For as many times as we saw that one highlight from the Outback Bowl there were just as many times that Michigan's Taylor Lewan was holding his own against the all world defensive end. Last week (despite "reports" of a stomach virus) UNC's James Hurst did the same, if not more.

Coach Will Friend doesn't have that one man answer, but the question I have is will he just rotate bodies in there in hopes of stumbling onto a solution, or is there a plan in place?

Look for Bobo to do a lot of what the Tarheels did - run away from Clowney and use screens to neutralize the pass rush. But also look for a player that wasn't in Athens in 2011 or in Columbia last year to do his part...Quayvon Hicks. 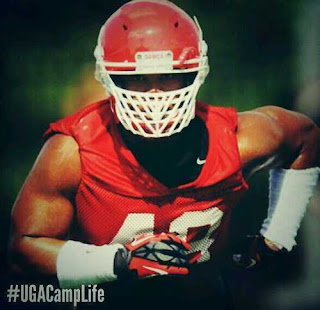