Does our running game complement the personnel?

I'm just going to ask the question here, because Saturday night really showcased it. And I say that without without having had the benefit of replay and without having re-watched the game, yet. Also, I realize that our offense amassed over 500 yards of offense and 35 points. It seems ludicrous to criticize play calling and pick nits with Bobo's playbook. But with Gurley missing much of the game, we never really seemed to adjust to the different style of running the ball that Keith Marshall brings to the backfield. And that's been stuck in my craw. Blame Clempson post-game traffic.

But first, look at the stat lines: 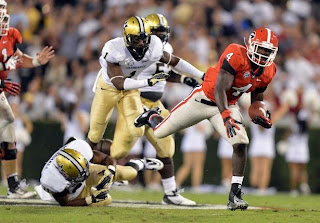 I resist the monikers for these two like "Thunder and Lightning". I admit there are times when it is fitting. But the practice suggests that each has a role to play and I truly believe both Gurley and Marshall can be feature backs. Together they are greater, of course. But I digress.

We were relentless in challenging the heart of the Clemson defense with running the ball on dives and traps. That's made for a back like Gurley and he showed (based on the stat line above alone) that he can handle it and make it work. But we used Marshall essentially to run clock it seems. Content to get a couple yards and burn another 45 ticks instead of stretching the field and getting the defense moving laterally as much as north/south.

And I not saying Marshall can't break through to the second level on those plays. He proved he can last season. But his strength is stretching out wide on sweeps and turning the corner before the defense can react. The Clemson defense played well, and we ran right into their hands and made it too easy for them. I didn't see a single jersey in orange that could've caught Marshall once he got a step. The guy is lightning quick and faster than a laser.

Instead, we used him like a plunger and sucked their front seven in.

If you're interested, look at this compilation video of Gurley and Marshall highlights from 2012. I'm not going to embed it because it does some uncomfortable things with the Herschel comparison and has some weird music. But it shows a number of things. Not the least of which is that our running game can do a much better job of matching the talent in the backfield.
Hunker'd Down by Bernie at 5:38 AM