Friday Misery - A Prius, a goat and a box of whine

Before we begin, RIP "Poppa N". Always enjoyed tailgating with you, even though when it came down to cards you had a way of making me the "asshole". We will always hold your seat in Sanford with pride! And I'm sure around 3:30 tomorrow Munson will be in your ear once again. Hunker Down and Go Dawgs!

They just suck. So hard.
Good gracious we fell down hard from that win. Took a few days as we patted ourselves on the back and inflated our egos...to where they should be anyway. But when it happened we fell hard. And all of a sudden we're selling ourselves short again.

I get it, the 2009 loss to the Vols was one of the worst events in Knoxville. Ever. That includes the time Milli Vanilli opened for Nickelback at Neyland Stadium on 2 for 1 Possum on a Stick Night. And the 2007 game was a textbook case of how to fail epically. Hard.

I could go on for another few lines, but you get the point. Trips up yonder, many times, haven't been pleasant. But don't lose out on this opportunity to stomp a hobnail boot on those backwood bastards while they're down. For those of you who seem to have forgotten that footwear reference, aim your mouse here.

This is the worst Tennessee team we might ever see.  Ever. EVER. They were a really bad team last year. Then they lost Tyler Bray and Justin Hunter and replaced them with guys that wouldn't make the two deep for Kentucky. (Well...ok, Georgia Tech's two-deep.) They're awful. So stop mincing words and call a spade a spade. Dawg up and stop resembling that scrawny ass coon hound. WE ARE GEORGIA! AND WE'RE COMING TO KICK THEIR ASS.

Nothing sucks like a big orange. And Lord have mercy, this is one mother of a BIG ORANGE!!

And then Cooter said to Jimmy Bob...
"You hold its legs and I'll go first."

I'm not saying Tennessee fans are stupid...well, yes I am. They took to rejoicing early this week when our old friend KiffyBaby got hisself canned. On one hand I understand their exuberance as that bastard really did them over good. Laid em down for a season of sexy time, then threw a wadded up ten on the bed and left them in the dead of night with nothing but a confused look and a bag of secondary violations.

And this picture they made of themselves next to their Molestation Mountain is cute. 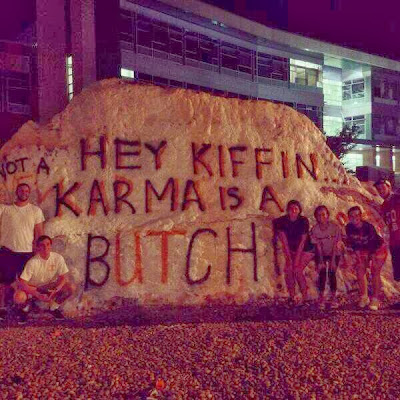 This is what knuckle-draggers do. They miss the whole point. You Tennessee fans, Mr. and Mrs. Junior and Lulu, you're the butt of the joke. You ran off a good coach who'd had a couple bad seasons just so you could turn the program into a dumpster fire. Mike Hamilton lit the match and then it's all "Oooooh, look how pretty!!"

You're too busy wiggling that thumb up your ass to realize you're at rock bottom. Karma ain't a "Butch" so much as it is a herd of frat boys after the box of Franzia is empty. It's a BB gun in the floorboard of a Prius. It's a pair of orange britches covering up Lil Dools' diaper his momma strapped on him good and tight. It's the end of a funnel that smells like poo. It's Rocky Top being played when you get ONE GOTDAMN FIRST DOWN. It's Jabari's finger lickin greasy fingers. It's having to steal water from a friendly neighbor just so you can fight the fire that you created years ago..."Ooooh...sooo pretty!!...uh-oh...too hot! TOO HOT!!"

As Poppa N once said to me, "Bernie, you might be the permanent asshole." True words, as I suck at cards once the seal on the bourbon is cracked. But it's never been home to any foreign objects.