Gurley, Matthews both a "no go"

In what was the least surprising news of the week, Richt said neither Georgia's top running back nor its free safety are expected to play Saturday. Gurley appears to be making some progress, but he'll rest the tender ankle another couple weeks and hopefully be 100% ready for Florida. Richt said he was running at a very conservative tempo and making some cuts. Just not doing anything that would lead you to believe he is ready to play. 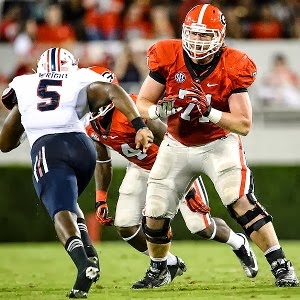 Matthews meanwhile wasn't even practicing on his pulled hamstring. He, along with Gurley, will miss his third consecutive game.

But, there was some news out of practice that I found interesting and positive. John Theus will start at right tackle in place of Kolton Houston. Theus has been a big mystery this season. Considered a top prospect for the NFL one day, he let a guy who hadn't played football in years supplant him as the the starter. When Theus is in top form, this line performs better, bottom line. We need him at full tilt down the stretch if we're going to keep the pressure on Missouri et al. for a trip to the Georgia Dome.

Also, mentioned yesterday that Johnathon Rumph will play for the first time on Saturday. Here's what Richt had to say about the lanky wideout:


“He hasn’t played all year, obviously,” Richt said. “He hasn’t practiced in a long time, or at least before this week. He’s still getting comfortable with the system. To think that he’ll make a huge impact, it would be hard to predict that, but hopefully he’ll get in the game and when he gets opportunities, he’ll make plays.”