Early thoughts on the flats

Limited posting here the next couple days, so I'll make this quick and to the point. After all, this is a pretty straight forward matchup. 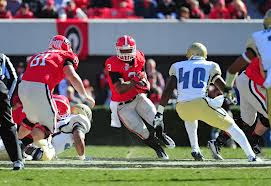 Offensively we're fine. It'll be awkward not seeing #11 out there, but Mason will get plenty of work with the 1s this week. And of course we always have Gurley. In fact, he's such an important presence I went back and looked at his first game against the Yellow Jackets. He averaged eight yards a carry and 10 yards a catch with two touchdowns. So #3 is Mason's greatest asset, just as he was for Murray.

Defensively is a different story. What concerns me is that we're preparing for this offense on one week of practice. Last year we had GA Southern as a primer and the benefits were obvious as we actually defended the triple option better against Tech than the Eagles. Still, we can learn a thing or two from 2011 when we had the Nerds one week after Kentucky. It'll just take some discipline and decisive tackling. Like this

Finishing in the positive for turnover margin would also help tremendously.

And special teams...I'm thinking a return to the house would be spectacular. That's what I got. How about y'all?
Hunker'd Down by Bernie at 7:13 AM