Short version: Dawgs win. Unless Todd Gurley gets abducted by Manti Te'o's girlfriend. (Again, within the statute of limitations on that one.) 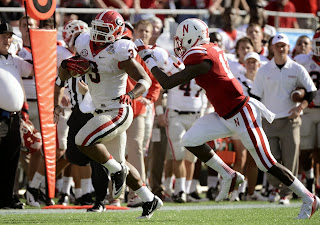 Nebraska gives up 7.1 yards per pass. Georgia averages 9.0. In the season opener the Cornhuskers gave up nearly 400 yards to Wyoming. Yes, WYOMING. They buckled down after that, but it was all to teams that don't have guys like Bennett and Conley (who practiced yesterday) and Wooten (playing in his last game not far from his home town) and two other seniors who contributed a lot in the passing game - Lynch and McGowan. Add in a couple eager, younger playmakers like Reggie Davis and Jonathon Rumph, and I think Mason will keep the Husker secondary busy. Very busy.

As for Gurley, in last season's Capital One Bowl he had 23 carries for 125 yards. He's fully rested and as healthy as he's been since mid-September. He's gonna get his.

On defense things are a little trickier. Grantham won't have Josh Harvey-Clemons or Sheldon Dawson. But the key will be stopping Ameer Abdullah on the ground. He has 59% of the rushing yards for Pelini. They weren't that good through the air with Taylor Martinez. At least not enough to really scare you. And they're a shadow of what they were once he went down with a foot injury in September. So yeh, it's all about stopping them on the ground. It doesn't take a rocket surgeon to figure out that this plays into Georgia's strength on that side of the ball.

So, the keys: run the ball, catch the catchable passes, tackle them like you mean it, and don't go batshit crazy when kicking the football. Easy. Peasy. Lemon squeezy.
Hunker'd Down by Bernie at 8:04 AM