Is the water turning brown in Tuscaloosa? - UPDATED

UPDATE - this morning news broke of another arrest - Dee Hart. One of the 36 running backs Saban has on staff, arrested for possession and not knowing his middle name providing false information. What?!?

------------------------
Just posing a question. But ever since November things have been consistently different over in the house that Saban the Bear built. Don't get me wrong. Not saying things are crumbling to dust. Just some weird and unusual happenings that may or may not add together as much. 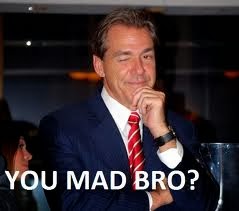 It's a lot of mostly little things. Sure. And I certainly doubt there'll be much to come out of the booster stuff. Still. I mean, maybe it's the fact that the Tide is enduring a two game losing skid that will last at least until August 30th. But things have a different feel over yonder.

Lane Kiffin? C'mon man. I still can't get over that one.