Tuesday's Meatloaf - of fees and Fezziks

[Half of this post has been sitting in the oven for awhile. And I just didn't quite finish it (again) Sunday night. So to keep it from being terribly overcooked for yet another week, you get a very rare edition of Tuesday's meatloaf. Enjoy!]

Hello this is Bank of American Corporate Greed in America, how may I direct your call to someone who can actually pretend to give a damn?

Well, what happened was I was going to the grocery store on Christmas Eve to get some last minu...

Good afternoon. This is Chalonda. How can I disappoint you today?

You charged me a fee for someone else's bad check. I'd like that money credited back to my account.

I'm sorry sir. It's ours now and we're keeping it. You should be more careful who you take checks from in the future. Can I interest you in a Money Market accou...

He was a kid! Stranded on the side of the road with no gas. I gave him a ride to the gas station and gave him some money. Did I mention it was Christmas Eve?!!?

Sir, he didn't have $20 in his account to cover his reimbursement. Maybe you can be charitable with your cash, but we're going to bill his bank for every cent we can. Now, how about that...

It was Christmas Eve DAMMIT! I was being nice and now you're penalizing me for it?

Yes. Is there anything else I can not help you with today sir?

Okay. I guess just one thing. How much is the fee for closing my accounts?

Yes. It's definitely better this way. Here's a plate reader. No fees added.

Today's Ingredients
- First up, Emerson covers a wide variety of red and black topics in this post, hopefully the first of many On the beats.
- Not a great start this weekend for the Diamond Dawgs, especially the pitching staff. But this is a nice preview to the season and its expectations by MaconDawg.
- After the latest NCAA tune-up, Blutarsky revs the HUNHcycle engine.
- Speaking of slowing the game down, if you haven't already, be sure you catch Spencer Hall's A Very Bielema Valentines Day before the roses wilt.
- Over at Georgia Sports Blog, PWD runs down the odds of Fox's re-energized team making the NIT. And Tyler looks at just how Fox out-coached the guy that'd rather placate Marshall Henderson's ego than his wife's libido.
- Hoop Dawgs looks at the player at the center of this hardcourt resurgence - Charles Mann.
- Bulldawg Illustrated has a nice Q&A with new Georgia Bulldog offensive lineman Dyshon Sims' mother.
- Kimberley looks a little closer at the defensive end that flipped his commitment to Georgia over the weekend.
- Good weekend for former UGA golfers. Congrats to Bubba, Harris English and friend of the blog Brian Harman!
- Lastly, just wanted to make sure you caught this Valentines Day themed post by Garbin. Just another great read you will not want to have missed.

Heard about this pic (or one similar to it) on the latest 1Beer1Song podcast. Being a longtime member of the Brute Squad fan of the movie The Princess Bride I felt compelled to catalog it here. 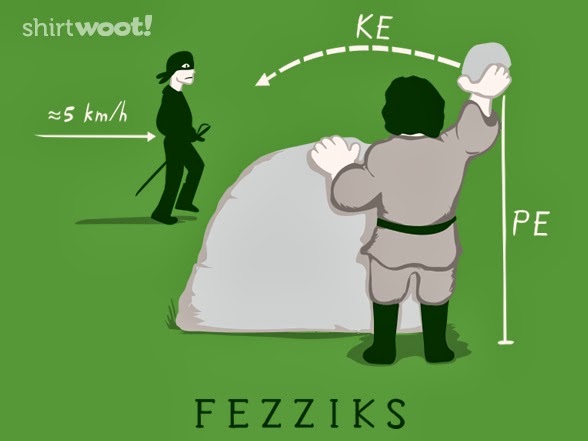 That's just fantastic. Unfortunately, they don't sell this shirt any more. Which is clearly not fantastic. Oh well.

But if there's another thing Fezzik taught me other than how to rhyme away the time, it was that it's important to encourage one another. Whether you're futilely throwing punches at a man twice your size or wiggling your finger after being mostly dead all day, it's important to recognize good effort and good progress. And here in the middle of February, when the height of the off season is still nowhere in sight and the journey seems to only get longer with each passing day, I just want you to feel you are doing well.


Keep it up! I believe in you! At least you didn't get your
degree form Auburn! You look great in that Halocaust cloak dude!

It's also a time when a college football heavy blog can get pretty difficult to keep afloat. But you should know I've got some exciting developments on the horizon. And I've also been compiling a list of important off season topics we should discuss at length and ad nauseam and to the nth degree as well.

So stay tuned. And until then, here's you fork Reader. Have a great Tuesday!

Bernie
Hunker'd Down by Bernie at 5:39 AM