Dawgs in the Draft - Chasing (and living) the Dream

My kids have all A's and B's. I don't say that to brag. (Ok, well a little bit.) But when I look at their grades and then hear them verbalize being overly anxious about a test that the state has mandated, it really sticks in my craw. They're good kids and have worked hard. They have incredible teachers who have pushed them to realize their academic potential. And yet there's still this assessment that's supposed to tell us more than all of the classwork, homework, projects, quizzes and tests combined. 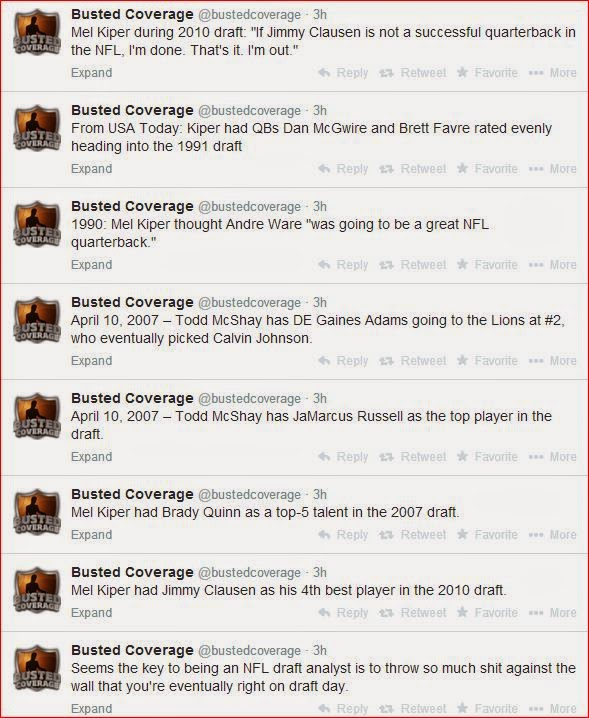 Something Garrison said in that last podcast really resonated with me. Probably because of this state testing thing that has me a bit distracted. But he alluded to the fact (a couple times) that too much attention is given to what these NFL Draft "experts" are saying and the numbers put up at the combine. For hours upon hours and days upon days they've been talking more and more about a glimpse taken through a window as opposed to the view one can get from just opening the door.

Tuesday Busted Coverage was sending out some informative and historical tweets related to the poo that these experts like to fling around. I grabbed a screen shot for you of some of the best ones to the right, but you can read more of them here if you're so inclined. The point being that sure, these guys get some things right. But Jimmy Clausen was a solid enough pick to bet one's career on it?

So Clowney is the jewel of the 2014 draft. As the saying goes, he looks good getting off the bus. He's a freakish blend of size and speed. Many teams covet his potential at the professional level. So will they overlook the fact that he took some sick days this past season and that his stats took a significant drop from his sophomore to his junior year? Most certainly, yes. And one team will pay him handsomely in hopes that the potential they think they see is realized.

No wonder a guy like Garrison Smith, whose numbers dwarf the defensive lineman Todd McShay calls a "once in a decade type of natural talent", is turned sour by the spectacle that is the NFL draft coverage these days. After all, Smith had twice as many sacks as his SEC East counterpart, the guy considered to be the best pass rusher in this year's class.

Which leads me to something else Smith said. When asked if he was nervous about the draft or where he may end up living in a couple of months he quickly responded no, that he was excited for the opportunity and would be happy with whatever comes to pass. That's a sentiment echoed by former teammates like Rantavious Wooten:


“I did everything that I could do,” Wooten said after Georgia’s Pro Day last month. “I’m going to sit back, relax and whatever happens, happens. I’m not going to stress about the draft or sit here and put so much pressure on myself or everything like that. I did everything I could do. If it works out for me, great. If I get drafted, great. Free agent, whatever I have to do, I’m fine with it.”

While most of us would have trouble relating to what it's like to be on the verge of breaking into professional football, we've all found ourselves yearning for certain job situations, promotions, advancements. You work hard towards getting to a certain position where you can validate all of those long hours of preparation. It's rewarding to realize that level of success.

As Weiszer points out, some of the Dawgs in this year's class of draft eligible players may find themselves in Marlon Brown's shoes from a year ago - for whatever reason, having to prove themselves further and having to beat someone out of a roster spot. They are chasing the dream, one that they've had for years. Decades even, as many of them have been aiming for it since they were learning their ABC's. Some have watched friends and family make made poor choices, using those experiences as motivation for a better life. They've overcome injuries and even endured coaching changes, all while balancing the life of a student and an athlete.


The obstacles lay behind these Dawgs now. They have have refused to settle for what might have been. And are pursuing the answer to what will be.
Hunker'd Down by Bernie at 8:01 AM