Was reading up last night on some red and black draft history for a post that will come out tomorrow, and I rediscovered a story I had forgotten. So I started to wonder if you had forgotten it too.

Terrell Davis came to Athens by way of Long Beach State. He redshirted his freshman year, rushed for a modest 262 yards his first season and then found himself without a field when the program there was eliminated for budget reasons.

So he came all the way out east to play for Georgia, but quickly found himself on the bench behind future 1st round draft pick Garrison Hearst. Once the star tailback was officially an Arizona Cardinal, Davis seemed to blossom as an every down back while rushing for over 800 yards and as a receiver out of the backfield for another 160. He ran with power and had good speed for a tailback with his size. With really just one full season of college football experience, he decided to remain his senior season in hopes of becoming a top pick the following April. 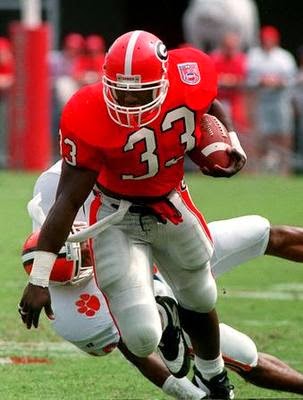 But his senior season was marked by a hamstring injury and disagreements with head coach Ray Goff. The hamstring was a nagging injury that forced him out of the backfield for three games. Meanwhile, Goff insisted Davis practice or ride the bench his senior season. I remember hearing stories of disputes between the two both at the time and later after Goff was let go. In one the head coach had an all out meltdown in the locker room at the half insisting Davis man up and find his helmet.

And while that is mostly a matter between the coach and the player, it came to a true boil when Davis was trying his best to get drafted. He'd showed great promise as a potential every down back for an NFL roster, but there were questions about his health and durability. According to Davis, Goff was not only of no help in this regard, but he made matters worse. Much worse.


"The head man there didn't go out of his way to even sit down with the scouts and tell them about my situation, " Terrell complains of his former coach. "And that goes a long way, because they are going to go with who knows you best. He was just real derogatory in everything he did...when the scouts would come down there, he would lock up the film room and go home! He was just mean to everybody - he's hurt countless players that way,"

Of course, we all know eventually Davis went on to a great albeit short NFL career in Denver. He joined the 2000 yard club in 1998 with the Broncos and has a couple of Super Bowl rings, not to mention a Super Bowl MVP trophy as well as an NFL MVP trophy.

All that to say (and to help lead up to tomorrow's post), that many times the best players aren't even given a look on draft day(s). And many sure as hell aren't ever mentioned by guys like Mel Kiper and Todd McShay during their endless coverage leading up to the selection show(s). Terrell Davis was one of three tailbacks in the history of the NFL to rush for as many yards as he did (6,413) in his first four seasons. The other two are also Hall of Famers, Eric Dickerson and Earl Cambell. And yet, Davis was the 21st running back chosen in the 1995 NFL draft, landing in the 6th round as the 196th player overall. Ahead of him were the likes of Kijana Carter (1st overall) and Tyrone Wheatley (17th). Carter amassed just over 1,100 yards in his injury-ridden career; Wheatley eventually passed Davis' four year total in his last season with the Raiders in 2004.

There may not be many names from the University of Georgia called during this year's NFL draft. At least not as many as we've grown accustomed to in recent years. But there's also a rich history of former Dawgs overcoming many obstacles to make rosters, further their career, provide for their families and make a name for themselves.
Hunker'd Down by Bernie at 12:54 PM