Around the tailgate - beginning the Hutson Mason era

One of the things I plan to do in the coming weeks is to rewatch the last three games of the season to get a better feel for what we can expect this fall from Hutson Mason. For now though I want to hear from these guys experts on how they feel about letting go of a four year starter in Murray, and handing the reins over to his backup.

For the first time since 2010 we'll start the season with a quarterback other than Aaron Murray. Since we've had a chance to see Hutson Mason in actual games other than garbage time, how do you feel about the having the fifth year senior under center?

Robert
I am pretty nervous about the QB play in the 2014 season.  As bad as I felt for Aaron Murray when he was injured in the Kentucky game, I was glad that Hutson Mason was going to see some quality action.

Coach Richt isn’t big on playing back-ups at the QB position, unless it is against an FCS opponent and the game is waaaaaaay out of hand.  If Murray had not been injured, we may not know what we have in 2014 at the QB position.  Now that we have seen Mason, I feel pretty good, but I think it is expecting too much for him to play quality SEC opponents on the road and not make a few mistakes.  After all, Aaron Murray still made some big mistakes as a senior.  The good news about the QB position on this 2014 team, he will not need to be perfect.  Our experienced RB’s will take a lot of the pressure off. 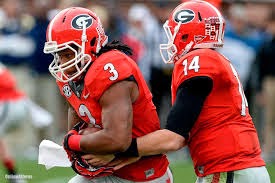 Joe Waterloo
Uneasy is probably the most diplommatic way to discribe how I feel about Mason at QB.  There is certainly a lot of talent around him at the skill positions to take the pressure off, but our offensive line had some key losses.  It wouldn't be as big of a deal if it didn't look like our defense is going to have some major growing pains.  I don't know how reasonable it is to expect him to lead our offense to putting up the kind of numbers Murray did last year, but that might be exactly what we need from him - especially early in the season while the defense gets it's legs under it.

AthensHomerDawg
In two and a half games plus mop up duties Hutson threw for approx. 1000 yards.  That pace over the course of a season would be similar to what Murray was able to do for our Dawgs. In the past we were known for our pro style approach mixing in some play action. Murray was comfortable with that approach but he was also very capable of running the spread, which we did. Mason is comfortable with a fast pace offense and the spread suits his game. While not possessing a Stafford like cannon for an arm he is accurate and can lead this team. He has had the reps with Conley and Bennett when they were practicing with the 2s. Look for him to familiarize himself with the rest of his receiving core this summer. He doesn't have to be the second coming of Murray. Gurley  and crew will take a lot of pressure off Mason allowing him to hone his skill set early season and be more of a veteran leader and decision maker later on. Sure there will be a bump or two in the road. But I liked what I saw at Tech when we got behind and Mason gathered himself up and started playing well. Of course there is no RB back I rather have in my backfield late in the fourth quarter other than the Gurley Man!
Go Dawgs!

Great stuff gentlemen! And y'all come back tomorrow when we look specifically at the secondary, who we have and who we don't.
Hunker'd Down by Bernie at 5:49 AM