Okay. So here we are. I'll have a few general observations at the end, but the bulk of this is designed to relay how Hutson Mason performed in his two starts. Unfortunately, I was a little more than halfway through the rewatch when I realized I should have done this much differently. For instance, what you'll see is a conglomeration of his completions, incompletions, sacks, and the interception with a brief description of the situation. It's all broken down by quarter.

For the bowl game I'll do it differently. I think it will be more helpful to just chart it all chronologically as you'll be able to see trends and have a better feel for the situation in the game. Like I said, I realized this about halfway through the Tech viewing. I didn't want to scrap two hours of work and do it all over. Sorry.

One more thing, I didn't track his rushes. I may change that when I rewatch the Nebraska game, even though he wasn't nearly as effective on the ground against the Cornhuskers as he was against Tech. I just saw enough to know that it could be a significant factor against man coverage and it could be an interesting development this season.

Anyway, I think you'll still get something from this. So here we go.

*adjusted for drops and referee incompetence, see below

First Quarter
Completions - (1st down/10 yards) swing pass to Bennett for 9 yards; (2/13) tunnel screen to Bennett for a couple yards; (3/5) finally hits Conley sitting in a zone for a first down

Sacks - one by Attachou through a double team on a play action to Gurley; another one as he slid to his right out of the pocket to force a third and long

Second Quarter
Completions - (2/14) nice out route to Conley for a first down; (1/10) screen to Gurley for 13 yards; (1/10) quick snap after screen pass and eventually rolls out to left and finds Conley on the sideline for another first down; (1/10) timing sideline out pattern to Conley for third consecutive first down pass in hurry up; (1/10) dump in the middle to JJ Green for 10 yards and another first down; (2/goal) rolls right and drops it to Gurley who goes airborne for TD! 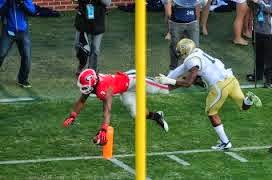 Incompletions - (3/12) rolled right to find Gurley underneath but it was bobbled out of bounds; (3/9) pretty nice pass to McGowan that dropped for an incompletion, probably should've been caught

Third Quarter
Completions - (1/10) play action and a quick pass in the seam to Bennett, ruled an incompletion for some reason then for some bullshit reason the booth confirms the bullshit call on the field.

Incompletions - (1/10) poorly thrown ball to Wooten that was well behind him; (2/10) next play, dropped pass by Lynch; (1/25) after the Theus illegal block nullified a touchdown Mason sails one over McGowan's head in the endzone; (1/10) to start the drive after the missed Tech field goal attempt, incomplete screen pass to Gurley that was pretty well defended

Fourth Quarter
Completions - (1/10) after Tech takes 27-17 lead, another out route to Conley for a first down; (4/6) with game in balance Richt and Bobo put ball in Mason's hands and he goes back to Bennett for a first down; (2/10) check down to Gurley for a few yards; (3/4) Mason takes a clean, hard shot from a blitzing Brandon Watts but makes a strong throw to McGowan on sideline for the first down; (2/12) easy pass to a wide open Bennett on a crossing pattern for about 20 yards;

Incompletions - (2/6) pass over middle to McGowan is dropped; (3/6) ball thrown behind Bennett; (1/10) screen pass broken up by Attachou; (1/10) misses a throw to Gurley underneath; (3/12) facing a little pressure up the middle, Mason sails one over Bennett's head at the goal line

Sacks - after the JHC interception and two subsequent handoffs to Gurley, Mason is sacked on a play action by Attachou

Overall Thoughts
>Tech mixed up their coverages early. They didn't blitz much as they were able to pressure Mason with their ends for the most part. And when he had time, Tech often had dropped both nickel linebackers into coverage that forced the pass underneath or an incompletion. 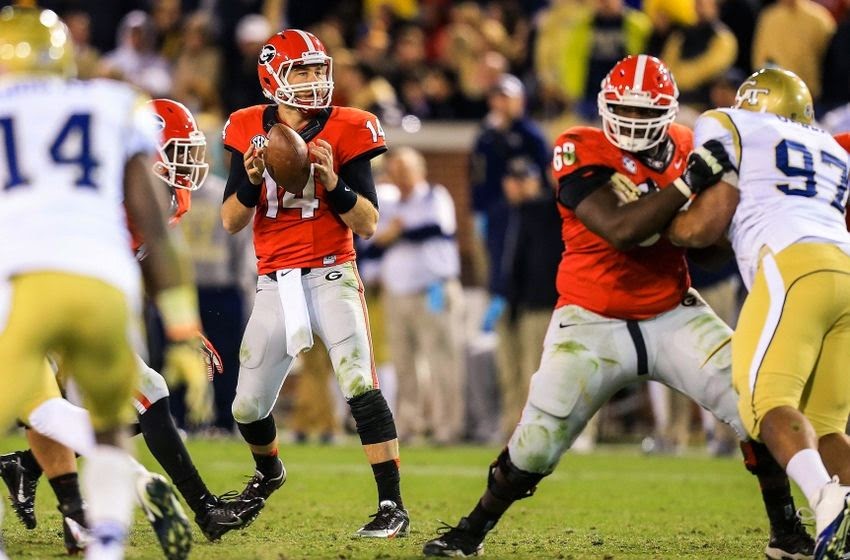 >But the last drive of the first half was spectacular for Mason. His accuracy helped Bobo match his preference for speed and no huddle. Mason responded by going 6/6 for 60+ yards and he had another run for about 10 yards. I just can't emphasize enough how big that drive was. Hopefully you remember. If not, find a way to go back and watch it. Just brilliant. And definitely changed the outlook of the game.
>The pace is important to Mason. There's no getting around that. He settled into a rhythm better when he felt in control of the snap and therefore the pace at which the play clock was running. But there's most certainly a balance there to be reached and it's something that he and Bobo will work out given enough time.
>Another consideration (and one that is getting a lot of traction of late) is how much Gurley can help Mason, especially early on against Clemson and the road trip to ColaEast. There's not much question that Gurley was a key factor in the comeback on the Flats as well as the eventual win. But Mason deserves some credit for making Tech pay for selling out on the run. He found the seams when it was needed and worked really well through his progressions.
>And to be perfectly honest, the offensive line deserves plenty of credit too. They had some lapses early. But even when Tech was stacking the box and daring Bobo to use Mason's arm, they continually made them pay by getting Gurley into situations where he was one on one against a linebacker or a defensive back instead of a tackle.
>That last bullet makes me nervous. Like, Vic Beasley and then an early trip to Chickumbia nervous.
>One last point. Not enough can be made of Richt and Bobo's trust in Mason. Early in the fourth quarter, down 10 points and facing a fourth and six at midfield, they didn't hesitate to put the ball in their new quarterback's hands. The conservative play was to punt and hope. But Mason rewarded their faith with a clean throw. Of course, it helps to have Michael Bennett on the other end with the game on the line.

So there ya go. Have at it in the comments. I'll cue up the Taxslayer Gator Bowl in the next few days and have our new quarterback rewound again. Go Dawgs!
Hunker'd Down by Bernie at 5:01 AM