So I fell into an HBO On Demand hole this weekend and the project I had planned here for the blog (as well as others around the house) took a backseat. Also, I originally said I was going to start with the Kentucky game. Turns out I don't actually have that one on the DVR after all and I can't seem to find the whole game on the YouTubes.

So...we're starting with the Tech game. The Kentucky game probably wouldn't have been a good measure anyway as it was out of hand pretty much when the ball was put in Mason's hands. I rewatched the Tech game last night and have the post pretty much ready. But I'd like to clean up some of the broader strokes before posting. Look for it later today or tomorrow morning.

In the mean time, I want to throw one thing out here. Back in June I had a chance to observe some workouts. I didn't see much of the weight session, but saw most of Mason's group as they ran the length of the practice field, over and over and over again. I lost count. But the gist was they run the length and get about 20 seconds to recover before running back. The whole time Coach T and Bobo and Friend were out there yelling at the group.

My two observations are that Leonard Floyd is a freak (which you knew) and Hutson Mason leads well by example. He stood out there in between each run as if he was ready for the whistle blow again. Meanwhile, his fellow teammates gasped for air with their hands on their hips and looked to be doing everything they could not to collapse in front of their coaches.

No, I'm not saying Mason wasn't struggling. But he was accepting the role of leader. And I really think he strives under a quick pace. It's going to be interesting to see how the play calling adjusts to his style after four years of the same quarterback. And I think it all starts by looking back at the last two games of the season.

Join me. Murray has moved on... 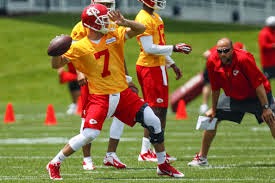 We should too. It's Mason Time!