Getting right to the point
I love this rivalry. I think I've made the reasons why I love it very clear. But right now I'm mostly miserable that this might be the last time I get to enjoy this series between two great programs that reside so close to one another and in which one has completely dominated the other. Tomorrow, after we kick their ass, that sadness will intensify and somehow become a comorbid condition with the sheer and utter joy of witnessing winning football again in Sanford Stadium.

Until then, I'm simply tired. Tired of words. I'm even tired of being glad that Grantham is gone and tired of writing about being glad that Pruitt is here. It makes me even more miserable because truly, what has Pruitt done for me lately? Nothing. I'm seriously thinking about benching him. Dude, do something! Georgia has zero turnovers so far this season. None. And don't get me started on Todd Gurley. I can hardly remember the last time he even scored a touchdown. It's ridiculous.

Let's all DO something! Let's nip something in the goddamn bud. Coach Magill was 93 years old and he still was getting after after it. You, me, her, them, and especially that dipshit over there with a thumb up his ass and an index finger on the mouse clicker, we haven't done a damn thing in months.

Except talk. And I'm sick of words. And apparently so is this guy:

Talking is for yesterday. The time for football is here. Like our friend Garrison Smith says, #TeamNoTalk. You want something done? Well then DO IT! Stop listening to these dumbass bloggers with their laptops and their wifi connections and their fistfuls of tater tots. Stop being message bored. Stop telling Coach Ekeler and Sherrer and this Jeremy Pruitt fella how awesome there are. Seriously, when you see that guy at Costco this afternoon with a buggy full of steak and potatoes and a case of Old Spice aftershave I want you to march right up to him and scream in his ear "KEVIN RAMSEY'S DEFENSE HAS MORE SACKS THAN YOURZ COACH JERRY PRUITTT!!!"

It might give you an uneasy feeling, and to be perfectly honest you may even get arrested, but it's for the best. You know what those gamechickens were doing all day Wednesday? Talking. You know what they were doing right before Kevin Sumlin cracked a can of Whoopass? Yup. Talking. It's the Friday before the season opener. It's time to lead with actions. Because words are for [redacted]!!! 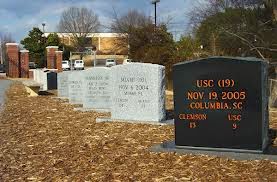 The greatest gimmick IPTAY ever pulled...
"Good morning, Coach Swinney's office."
"Hey, I'd like to buy a plot in his cemetery. Preferably one next to the freshly laid Ohio State one. You know, keep it consequential 'n all."
"Sir. Those aren't for sale. They're...for motivation. But I'm sorry for your loss."
"My loss? Heh. I wanna buy it for y'all."
[long awkward silence]
"Um, is this Coach Spurrier again? Because I faxed you that letter from my doctor after your last prank in November and..."
"Spurrier? No. This is Bernie. I'll bring my own shovel if that'll..." [line goes dead]

Stay cute Clempson. Yes, your team won the meeting last year. Yes, Sammy Watkinson was an incredible tackle football player. Yes, you're right, Georgia is an SEC team. Yes, again, Herschel never scored on you. But that feather in your hay bill is awfully old. Is it not? Besides, while you were tweeting that for the 7,846th time this week, Gurley scored on you. Again. In his sleep. Wearing nothing but Scott Woerner boxers. While casually whistling a little James Brown. Perhaps you can put that on your defense's epitaph.

Speaking of Herschel, I want vindication. And I will grasp it within my sweaty palms like the Chapel Bell's rope, and laugh maniacally as the clock drains. I've waited impatiently for 34 weeks. The off season will end with this ... the next ... in two more sentences and we will step lively into another season of college GOTdamn football. We will spring to action towards another game that will be settled not with words, but with an old fashioned hunkering down 'tween the hedges.

Take it away Woerner!