The full replay is below if you would like to follow along, hunt for errors in my assessment, or just grind your teeth a bit. Also, here's the link to the post I put up on the Tech game that evaluates Mason's performance on the Flats.

As I mentioned earlier, I went about this one differently than the Tech rewatch. I was more interested in seeing how often we lined up in shotgun and Mason's overall comfortability as the game wore on. Mason went into the bowl game completing 64.8% of his passes on the season for 648 yards, 4 TD and 2 int. His official line against the Cornhuskers - 21/39, 53.8%, 320 yards, 1 TD, 1 int, and 9 carries for -18 yards. 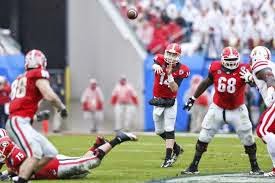 overall
- drops by receivers - 5 (there was one or two more that weren't definitive drops by my judgment)
- by quarter, the pass formation ratios were: 1st - 5 shotgun/2 drop back, 2nd - 10/4, 3rd - 10/2, 4th - 9/2
- Mason clearly depended on Lynch (6 catches for 69 yards) and Gurley (7 for 97 and a touchdown), but seemed to gain more confidence in going downfield as the game wore on.
- Obviously a heavy lean towards shotgun snaps, maybe a little more than usual. But unclear whether that was to appease Mason's preference or to protect against an offensive line that was struggling. I guess both as putting Mason in the shotgun allowed for better vision of the pass rush.
- What didn't help Mason in this game was the lack of a running game. A combination of factors - weather, aggressive defense, an unhealthy Gurley - limited his options downfield.
- But, when Gurley popped a couple runs into the secondary in the second half, Mason responded by looking downfield more.
- Another slight adjustment that was apparent was when the defense keyed on the swing pass to Gurley, Mason opted for an Lynch a couple times.
- Mason made some creative passes under duress as well as bought some time with his feet.
- There were times when he was quickly flustered, but that was mostly due to a consistent pass rush. Overall, I thought Mason made good reads and played the game conservatively.

Hutson Mason is clearly more comfortable in shotgun, but made some great throws after dropping back from under center as well. After the loss I felt he'd had a bad day, some of which wasn't his fault - drops, poor blocking, receivers struggling to make cuts. But after rewatching it I think Mason did exactly what we needed him to. His approach was to manage the game, let those around him make the plays, not force any throws and consequently avoid costly mistakes. Sure, he had a couple bad throws, but is that really any more than we can expect from a quarterback in the SEC?

As to my original question, only time will tell if Bobo is more comfortable calling plays for Mason. But really, how could he not be? Since Murray's senior season was cut short, Hutson Mason and Bobo have had eight months to work together. Starting a week from today, I expect Mason to manage the game quite well. That's all we need ask of him. But I bet he's ready for a heavier load if needed.