To me, it doesn't sound like Dabo and his defensive tackle are on the same page.


In the Tigers' latest intrasquad scrimmage Saturday, D.J. Howard had a 40-yard touchdown run, and not because he had a wide-open running lane.

"We try to knock a guy down with our shoulders instead of wrapping him up with our arms. A good back will run through that," head coach Dabo Swinney said. "You've got to make tackles in space, otherwise it's a big play."
Anthony and Williams each hinted Venables has made some subtle changes to the Tigers' rush-defense scheme up front, to try to corral home-run threats like Gurley.
"It's developing good, because we know the scheme now," Williams said. "Everybody's playing where they need to play and being disciplined. We're not playing over each other, everybody has an assignment and they're sticking to it."

For those of you unfamiliar with DJ Howard, he's the redshirt senior tailback for Clemson. Here's a picture of Howard next to Todd Gurley. 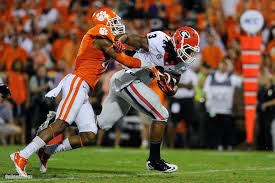 (Hint, Gurley is the one on the left brushing some dandruff off his back.)
Hunker'd Down by Bernie at 4:35 AM