He's hung half a hundred on Georgia tween the hedges. He taunted Dawg fans for years while dominating Ray Goff. He jokes about Richt's discipline policies.

Now, he'll spend all week talking about how hard it's going to be to stop Gurley and how the defense looked great against Clemson. He'll also remind everyone (again) that Sakerlina isn't nearly as talented as they have been. But make no mistake, Spurrier always has his eyes on the prize. 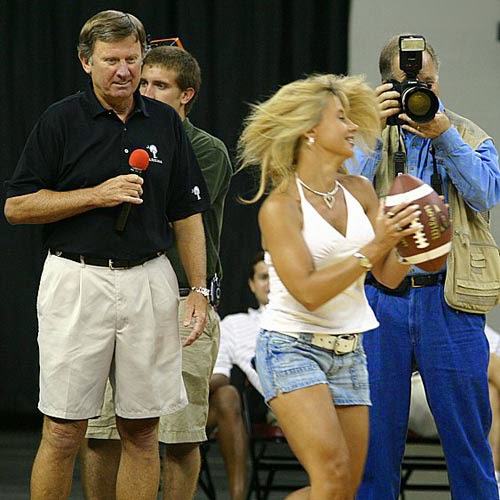 Yes, Steve Spurrier has been a thorn in Georgia's side for decades now. You think he wouldn't like to tie Vince Dooley's career win record while hosting the Dawgs Saturday evening?


Should the Gamecocks knock off the Bulldogs next weekend in Columbia, it would be Spurrier's 201st as an SEC coach, which would tie former Georgia coach Vince Dooley on the all-time list.

Of course he'd love nothing more. He'd probably even thank Goff for helping him achieve the milestone a little faster than expected. He'll then find some way to give Vince Dooley a backhanded compliment. And then he'll give us that conceited, evil smirk. And we'll be forced to hang our heads in shame.

It'll be up to Richt to find a way to keep that chicken shit confetti contained for at least another week.
Hunker'd Down by Bernie at 10:23 AM