Gainesville source has confirmed that #Gators quarterback Treon Harris is being investigated in a legal matter.
— David Jones (@DaveJonesUFbeat) October 6, 2014

Could've been much worse.

That was a close call. I thought Florida was giving Muschamp his walking papers. Everything is good now, actually better.
— Robert Wolfe (@DawgFan__1980) October 6, 2014

This is a story trying to gather its legs. Mr. Jones even had his post about how Harris was suspended taken down for some reason. Could be that the UF brass is trying to get a handle on it first. And I'm not saying they're trying to cover it up. There's also the possibility that a serious, lengthy, and thorough investigation needs to take place before any rash judgment is handed down that could jeopardize the rest of the team's morale./end snark

The original story is back up, but it stops short of saying Harris is suspended. 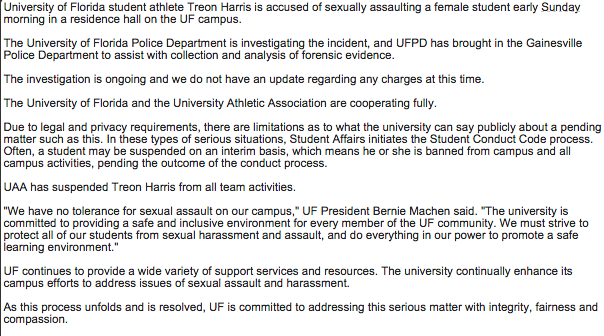