Just a thought on what I expect.

First off, I hope y'all are voting in the Mumme Poll. I'm glad those guys do that work over there. Because this year it will be especially interesting to see how things match up. On one hand, we have no idea what to expect with this new committee making the decisions. On another, that's kind of where we've been for quite sometime - in the dark. 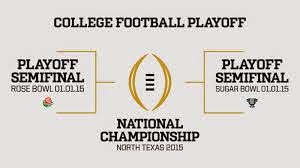 Next, although I've always figured this would eventually morph into an eight team playoff and then into something even more disastrously ridiculous. But it's interesting now on the eve of the first "rankings" to get that decisive feeling of impending doom. Weiszer and Fletcher discussed it some on their podcast yesterday, but it's at least somewhat conceivable that a two loss Georgia team beats an undefeated Miss State in Atlanta this December, thereby creating the first big monkey wrench for the CFB Playoff system.

With those broad strokes out of the way (and after poring over this week's rankings and Mumme Poll), here's what I expect: Miss State, FSU, Alabama and either Notre Dame or Oregon. I had Auburn just ahead of Oregon for the fourth spot on my ballot. But there's no way the committee will have three SEC teams. I think even two is a stretch; but they can get away with it if they so desire as eventually one of those two will represent the West division.

As for Oregon vs Notre Dame, how much weight does the close, moral victory in Tallahassee weigh for the Golden Domers? Personally I see the Seminoles as a flawed team surviving on chum, but they're undefeated and that's always so irresistibly sexy.

With all that being typed, they'll probably come out with TCU, Michigan State, Kansas State and Ole Miss. Again, joy.
Hunker'd Down by Bernie at 8:24 AM