Lot of responsibility (pressure) being put on Treon Harris' shoulders

The young man is quickly becoming one of the keys to the game. And his teammates seem eager to see what he can do as the starter.

"He has ability just to make plays,” senior center Max Garcia said. “When he is in the 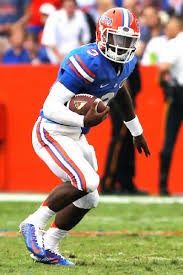 pocket, if someone is coming in from the left side, he'll scramble right and throw the ball 30 yards down the field. I really like that about him.

“He has this good pocket awareness, and he adds a really strong arm, too. He makes tons of plays in practice, unbelievable plays. I'm like, 'Man, this guy is a special player.' I really just want to see him transition what he does on the practice field to the game because he can make those plays and give us that excitement."

For the record, Harris has appeared in three games this season, going 12/18 for 263 yards, three touchdowns and one interception. He's also rushed for 51 yards on 15 attempts and has one touchdown on the ground.

If he makes some plays early (especially with his arm) it would be a huge confidence boost for a struggling team desperate for anything positive after three endless weeks of nothing but negative. One the other hand, if Pruitt's defense takes charge early, it'd be a helluva downer.

One way or the other, we should know by the end of the first half if Harris was a band-aid or a healing salve.
Hunker'd Down by Bernie at 7:52 AM