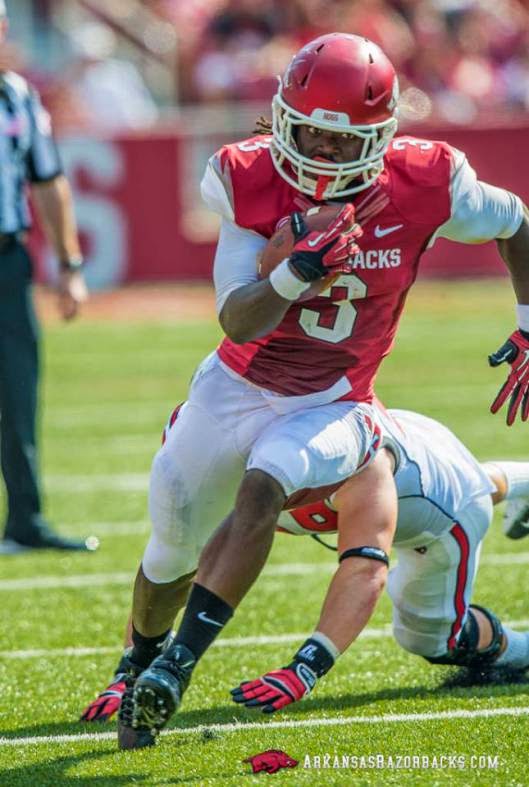 Sophomore sensation Alex Collins is in the throes of a "bad stretch". Missed a couple of workouts, suspended for a quarter, and then had his worst game of his career - just six carries for 13 yards. After the heartbreaking 14-13 loss to Alabama, Collins and the Razorbacks are ready to move forward.

Collins is expected to resume his role in the backfield with Williams and Marshall as the Razorbacks prepare for Saturday’s game against the Bulldogs. Once again, the Razorbacks will face a run defense that hasn’t allowed much production this season.
Georgia, which is coming off a 34-0 win at Missouri, is 12th in the NCAA in rushing defense (101.7 yards a game). The Bulldogs allowed 50 rushing yards last week.

If you dig into that article a little further there's a cute quote from offensive coordinator Jim Chaney about how Bama made them one dimensional. As if they weren't already.

And that is what makes this matchup intriguing. I think we can keep their ground game contained, at least as much as Bama if not better. But make no mistake that the Razorbacks have a stable of backs that they can keep fresh into the fourth quarter. Collins is the more talented of the three. And there's no doubt he'll come to Little Rock hungry.

Like yesterday, let's throw it over to Ramik for his take on the Razorbacks' run heavy offense:


“They are a physical team, but with the game plan we got this week, it’s gonna be fun for us.”