The program started in 1991 and comes to Athens with only 99 tackle football wins since then. Do the math and that's not real good y'all. Like, worse than Chan Gailey Tech Era bad. But with last week's victory over Liberty, the Buccaneers have 18 victories in the last two seasons. So these are dudes that aren't used to losing. 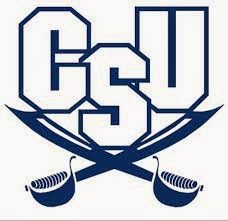 And perhaps that explains their refusal to lay down for Vanderbilt on October 11th. CSU outgained the 'Dores in total yards and rushing yards. They also racked up 19 first downs in the 21-20 loss in Nashville. Of considerable note is the fact that Vanderbilt didn't score a point in the second half. The Bucs smelled blood and anchored down.

How did Vanderbilt pull out a win against this considerable FCS foe? Well, the most telling sign is that Charleston Southern was only 2/14 on third downs. Get them behind the marker and then force their hand. They'd much rather run the football than pass.

And that will hold true Saturday when they come to Athens. The more they run the football forward, the less time Bobo has to run the Wild Honkey Nick Chubb and Friends before giving Kid Ramsey his snaps.

Some links:
- Lead up article to CSU's game against Liberty last weekend
- The Bucs at 'Dores box score
- Their roster is filled with Georgia kids, including one with ties to AD McGarity
Hunker'd Down by Bernie at 9:12 AM