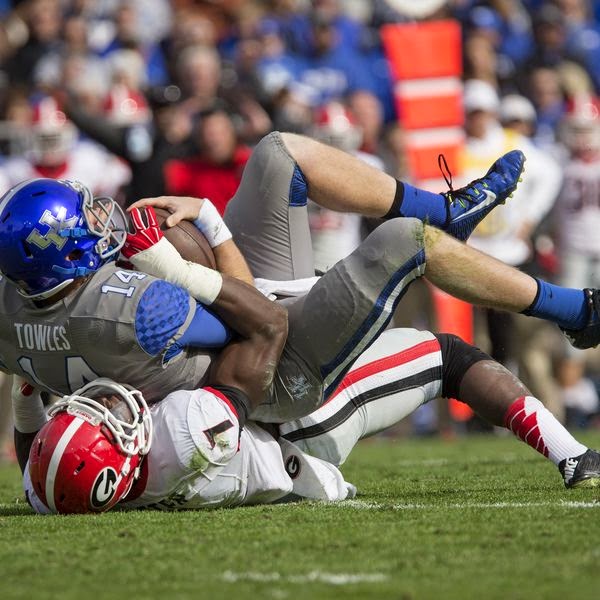 Had a chance to rewatch the game yesterday and really felt compelled to go into great detail about how dominant an effort it was Saturday in Commonwealth. But that would be too much I suppose. Still, there's a couple things I think I should add some weight to after seeing the game on television.

First, let's take a moment to give Sony Michel some credit. I suspected he'd make the trip to Lexington just due to the running back depth chart. But I didn't expect he'd get more than a few snaps just to test out the legs after missing a few weeks. But man, that kid came to play and barreled into a group of defenders right from the start. I saw many comments about the freshman possibly being "fragile" after his shoulder injury so early in his career. After Saturday it's safe to say the guy isn't going to shy away from contact. Impressive day for Michel.

Almost as impressive as Carter's coming out party. Leonard Floyd should feel some pressure now for sure. There were rumblings of a shoulder issue being the reason Lorenzo Carter started and played so much. I think it's clear Carter is close to passing if not having already passed Floyd in terms of what Coaches Sherrer and Pruitt want to see from the "Sam". They're currently listed as co-starters. Against a team as good at running the ball as Auburn is, and after Carter played so well against the Wildcats, I'd be surprised if we don't see more and more out of this week's SEC D-lineman of the Week.

Lastly, the play I rewound and rewatched the most was the kick coverage team trying to corral that (non) fumble. Marshall Morgan really, really wanted that ball y'all.
Hunker'd Down by Bernie at 4:58 AM