Erk Russell always had a way with communication. Otherwise "GATA!" would've never been born from GTAA, Georgia Tech Athletic Association. Or whatever the hell.

So when the lesson turned to gap integrity, Erk used this story of Mambo Gook to communicate the importance of being where you're supposed to be, doing what you're supposed to be doing. "If you think you're coming my way, that's the wrong hole brother, because you ain't gonna make nothin' here."

So, with that in mind...as promised.


The "Mambo Gook" story goes like this: A young Georgia Tech engineering graduate had been working in the oil fields of Saudi Arabia for around six months. He was about to go stark raving mad because the only women that he had seen in Arabia were those dressed in the long gowns with the veils covering their faces. The women were not very friendly at all. As a matter of fact, he hadn't spoken to one since he had been working there. 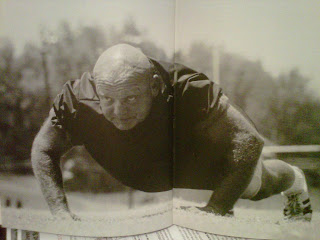 He had been used to the feminine pulchritude of Peachtree Street in Atlanta and missed that scenery and his feminine companionship more than anything else. As he was sitting in the little bar at the golf course there in Saudi Arabia, he happened to be seated next to one of the local sheiks.

This particular sheik had spent some time in the United States and conversed with the young engineer as best he could with the little English he could speak. As they sipped on their drinks the young engineer expressed to the sheik that he liked everything fine, except he really missed the feminine companionship that he once enjoyed back in Atlanta. The sheik could get enough out of the conversation to understand what the young man meant. He promised the engineer that he would have, from his harem, one of his wives waiting for him when he got off from work the following afternoon.

Well, the young engineer hustled and worked through the day. He could hardly wait until quitting time. As he approached his tent, he saw this woman standing out front with her long gowns and veil. He figured that she knew why she was there and he surely knew why she was there, so he wouldn't waste any time. He picked her up right there at the tent flap, rushed her inside, threw her down on the cot and commenced to making wild, passionate love to the woman. Immediately she began to shout, "Mambo Gook," "Mambo Gook." She repeated that over and over and over again. The young engineer figured this was an Arabian expression of ecstasy.

Well, it didn't take too long for the young man to finish the first round and as soon as he relaxed his grasp, the woman still screaming, "Mambo Gook," ran through the tent flap and disappeared across the desert, continuing to scream, "Mambo Gook."

The next day the young engineer and the local sheik had made arrangements to play golf and the young engineer wanted a chance to thank the sheik for his courtesy of having the woman there. As they played the first hole, the sheik hit a magnificent shot, straight to the green, the ball hit, bounced and rolled right into the cup. It was a great golf shot and the young engineer wanted to express the greatness of that shot with something more than the usual, "Nice shot," or, "Great shot." The thought of the Arabian expression of ecstasy occurred to him, and he said, "Mambo Gook, sheik, Mambo Gook.".

The sheik turned to him, looked at him with amazement and said, "What do you mean, wrong hole?"