I've decided to break my rewatch into a couple different posts. Truly, there's not much more to say about this game other than Georgia dominated the Tigers. It seems as if Pruitt has Malzahn's number, for sure. But Auburn never really attempted to adjust to what Georgia's defense was doing. I didn't think Auburn challenged Georgia up the middle nearly enough to win the game. Seems like there were yards there to be had. And Artis-Payne was having a much better game than the Tigers' other playmakers. 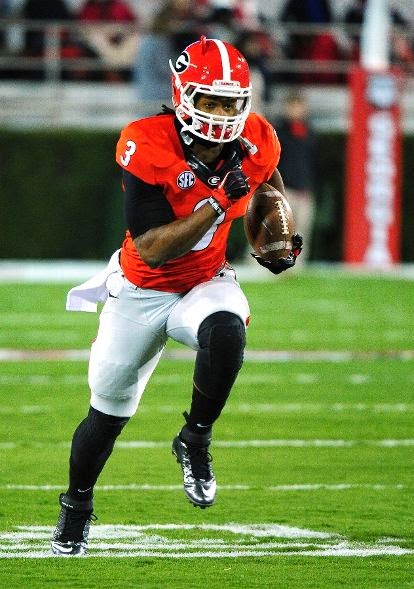 I'm not saying that would've turned the game in Auburn's favor completely, but it's worth asking; what if Auburn had run Artis-Payne, the SEC's rushing leader, up the middle more?

Next, what if Gurley's kickoff return had stood? First, it was a good call and the touchdown should've come off the board. Vavlas Rankin had a good hold of an Auburn guy and it was an easy call to make. But as I rewatched it this question stuck out to me. Because Auburn had just scored on their first possession. Granted, Pruitt's defense forced them to convert a few third downs, but first blood was still theirs.

Then Gurley totes it 105 yards. If it stands we may not even go to a commercial break there. ESPN might have just replayed the return a couple times, sent it down to Holly Rowe for a quick update, and then suddenly the defense is right back out there.

Again, it may not have swung things in Auburn's favor completely. But we spent some time talking about the energy and momentum of this game as one of the keys all last week. Turns out Georgia's defense was prepared and ready to be a dominant force. Would it have been able to do that had it spent most of the first quarter on the field?

No, I'm not saying I'm glad Gurley's return didn't stand. Especially given the way things ended, it would've been nice for that to be one of the official highlights. But this was a game of momentum and this defense continually stamped out all of Auburn's after that first drive. So it just made me wonder...
Hunker'd Down by Bernie at 6:38 AM