I'll be honest. I would start Chubb.

I asked you yesterday. And now I've made up my mind. But first, Emerson sets the stage:

Of course, Georgia’s running game hasn’t suffered without Gurley, as freshman Nick Chubb has rushed for 600-plus yards the past four games, and fellow freshman Sony Michel looked good in his return Saturday from a shoulder injury. 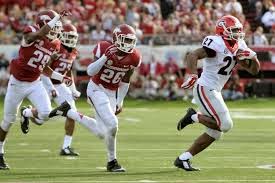 It’s a fair question whether Gurley will even start, although Chubb said Saturday, “I know I haven’t taken his spot. I’m looking forward to Todd getting back on the field and playing with him. I miss him out there.”
Richt said he and the coaches haven’t even discussed the starting job but indicated that Chubb, Gurley and Michel will play. Georgia’s head coach also said he has no concern about Gurley being rusty, pointing out that he has been practicing the entire time.
“I think he’s stayed in pretty good condition while he hasn’t been playing. I don’t think you forget how to play football in five weeks,” Richt said.

Trust me, I'm as excited as anyone to get Todd Gurley back this Saturday. Some antiquated rule has robbed us of four games getting to see the best offensive player to wear the G in decades. It pisses me off.

But if I'm Coach Richt, when I talk with my offensive coaches about who starts against Auburn I'm pondering two other very important points: 1) Todd Gurley knew it was a rule and broke it to the point that the NCAA gave him four games in purgatory, and 2) we haven't missed #3 that much in terms of production.

And that's because of one Nick Chubb. I think he's earned the start and I know I would give it to him.

Sure. Yes, you're right. I get it. Todd Gurley is the best player in the nation and it seems senseless not to start him in the biggest game of the season. More importantly, you're also right that it really doesn't matter; both Gurley and Chubb will get their carries in the game.

Still. I'd send #27 out there. If for no other reason than the fact that he's earned that honor and that this game would not have near the importance that it does were it not for these other numbers - four games, 102 carries, 671 yards, and five touchdowns.
Hunker'd Down by Bernie at 8:03 AM