We had them. And I say "we" because I include myself. To be fair, we had them because Hutson Mason hadn't given us a reason not to voice our concerns.

That was then, this is now.

The quarterback who some fans wanted benched now leads the SEC in pass efficiency rating. His passing yardage isn’t spectacular, but Mason is verging on putting himself in Georgia’s record book. 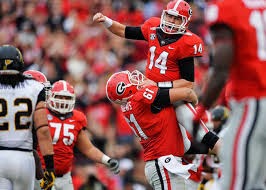 Mason has completed 68.4 percent of his passes this season, which would break the single-season school record of 65.0, set by Bobo in 1997.
“He’s probably gotten the most out of his ability than anybody that I’ve ever had,” Bobo said.
Mason’s current pass efficiency rating (158.12) is just behind Aaron Murray for the second best in any Georgia season. Murray did that last year and also holds the record of 174.82 for his 2012 season.

I think Damian Swann has been one of the most satisfying to see come around this season. But Mason is up there. He's just an different dude out there the last couple games compared to September and part of October. And I suspect most of that transformation has to do with trusting his offensive line. Those boys are getting after it.