In this episode: Bobo, the Rams, and McGarity's checkbook

First off, Mike Bobo is definitely not probably not most likely not going to Fort Collins CO to coach tackle football. He's one of several names on a list that has emerged. In terms of where he ranks on said list, I'd say probably third at worst.

Personally, I would have him first. I think Mike Bobo is a better offensive coordinator than Scott Frost, and I know he's a better recruiter than Pat Narduzzi. I also think this would be a good move for Mike Bobo. With the right assistants that have some regional ties, he would certainly do better than Florida's new coach did out yonder.

Georgia ranks eighth in the nation and first in the SEC in scoring offense this year. Georgia's offense, a pro-style system, has nonetheless put up big numbers the past few years. Two years ago the team set school records for total yards in a season (6,547) and touchdowns (72), and last year a new school record was set in average yards per game (484.2.) 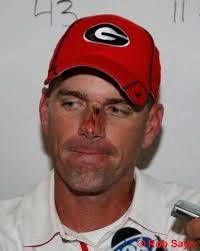 Last year he was named the offensive coordinator of the year by 247Sports.com, and two years ago he was a finalist for the Broyles Award, given to the nation's top assistant coach.
Bobo is also one of the Bulldogs' top recruiters, credited this year with being the main recruiter for defensive lineman Trent Thompson, one of the nation's top prospects.

First and foremost, Bobo consistently has an offense that produces yards and points whether he loses top talent to injuries and suspensions or not. And he's a relentless recruiter that recognizes today's high school talent as tomorrow's college team that can get him more yards and more points as well as help his fellow defensive coaches.

Yes, to me Mike Bobo is the perfect candidate for a program looking to pay a current assistant coach to be their head guy.

But I think Mike Bobo wants to be Georgia's next head coach. I didn't have the pleasure of talking to him on the phone last night, so this is just speculation, but I don't think he wants to pick the family up and move out west.

And although he may not admit it publicly or even among close friends, but I would imagine somewhere deep inside Mike Bobo is ready to be compensated commensurate with his regional and national peers. And that's why Blutarsky hits on the key question in my mind - Is Greg McGarity ready to take the blinders off and be proactive in dealing with his coaches' contracts?

There are many Dawg fans that are really busy scoffing at the news and possibility of Mike Bobo leaving Athens. They look down their noses and welcome any and all changes on staff. And that's fine. I would caution them to be careful what they wish for and all that, but they're entitled to their opinion. For me, I just trust Mike Bobo's numbers and production a lot more than I trust Greg McGarity's willingness to recognize and appreciate it.