On the first day of the year emotions among the DawgNation took a significant and downward turn. It was shaping up to be a miserable off season. More so than usual that is. We were primed and ready for eight months of arguing about injuries, defensive lapses and degradation, whether the new quarterback is ready for the reins that were thrust upon him, and countless replays of a football not being batted down.

Well, a month later and we're still going to be subjected to seven more months of some of that. But there's no question the fanbase has had a big dose of happy pills the last couple weeks. And that's because the program itself has undergone some drastic and very welcome changes. Complete overhaul defensively, as Andrew lays out chronologically here.
Wow. What a whirlwind. And all before the all important first Wednesday of February. If the remaining targets are feeling just half of the buzz DawgNation is feeling, it could be a fun week coming up. Stay tuned.

Jokes about off season expectations aside, there are some real reasons to be excited. And it starts with Coach Richt and his efficiency at getting a top flight replacement for Grantham before the former defensive coordinator's towel hit the spin cycle. From that moment forward, you could question a lot of things, but the head coach's energy and enthusiasm for winning wasn't one of them. I think that went a long way towards restoring a lot of faith for many of us.

And it has all happened while keeping together the 2014 recruiting class together- and possibly building on that class significantly.
Hunker'd Down by Bernie at 5:51 AM 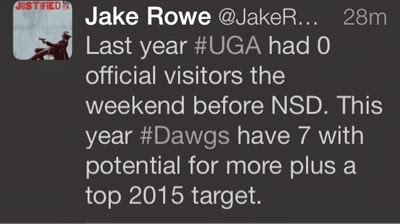 Some of that may be comparing Fujis to Galas. But there's a palpable energy coming from the UGA recruiting trails the last couple weeks.
Hunker'd Down by Bernie at 10:27 AM

What we know is that new defensive coordinator Jeremy Pruitt will likely coach the secondary. He's brought in Kevin Sherrer to help with linebackers. And earlier this week it was announced that Tracy Rocker would join the staff to coach the defensive line.

That leaves one spot open as far as assistant coaches. And Emerson is pointing to Mike Ekeler as the likely candidate to take the final spot.

Mike Ekeler, who coached Southern California's linebackers this past season, has emerged as a serious candidate to join Georgia's staff. In fact, two sources at UGA said Ekeler was on his way to meet with head coach Mark Richt on Thursday.
Attempts to reach Ekeler for comment were unsuccessful. A source cautioned that it was not yet a done deal, and that Ekeler had also been speaking with UCLA. But the fact he was heading to meet Richt points to an advanced candidacy.
There is no firm connection between Ekeler and UGA, although he did work at Oklahoma with Chris Wilson, who spent last season as Georgia's defensive line coach. Wilson, coincidentally, left for the same job at Southern California.
Ekeler, 42, was Indiana's defensive coordinator from 2010-12. Prior to that he was an assistant at Nebraska for three years under Bo Pelini. Ekeler also worked at LSU from 2005-07, serving as an intern and graduate assistant, when Pelini was the defensive coordinator there. The Tigers won the national title while Ekeler was there.
A source said Ekelar, if hired at UGA, would help coach linebackers and also have a role coaching special teams. Ekeler was a special teams standout at Kansas State, where he played from 1991-94.

The story goes on to emphasize Ekeler's background in special teams, which could weigh heavily in Richt's interest here. Ekeler was a special teams standout as a player at Kansas State. During his coaching career he has mostly followed Bo Pelini at Oklahoma, LSU and then Nebraska before becoming Indiana's Co-Defensive Coordinator in 2010 and USC's linebackers coach last season.

All in all, I like Ekeler's resume and from what I was able to read last night he could bring a lot of intensity to the sideline. I also like that he lettered at Kansas State for three years and was named a team captain by Bill Snyder himself during Ekeler's senior year.

Additionally, Kelin Johnson announced via Facebook last night that he was returning to Athens to be a grad assistant. Currently, the football program has four GA's after adding Christian Robinson last summer.

Coaching quote - on wheels and steering

I just love a good old-fashioned coach quote. Thanks to AHD for sharing. I'll share more of them in the coming weeks.

"Son, you've got a good engine, but your hands aren't on the steering wheel."
- Bobby Bowden / Florida State 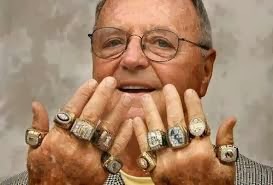 The best thing to happen in Champ's career...

Wife is from a state way up north called Virginia. Yesterday she taught us all how to make a good snowball when the snow isn't exactly suited for such construction. She was proud of that life skill developed while surviving the arctic climes above the 35th parallel. I told her I was prouder to come from a place the knew how to utilize sugar when constructing a pitcher of tea.

Anyway, shortly after we were married, Champ Bailey was selected in the first round with the seventh pick by the Washington Redskins. This was welcome news for both of us; her for the obvious reasons, and me because while growing up I had to choose other NFL teams to cheer for on Sundays as the local one was never on television. Often, the Redskins were it.

The other day we looked at how being a Redskin helped shape Bailey's career. Getting to learn the ins and outs of being an NFL corner is a richer experience with Darrell Green in the meeting room. But it was even more beneficial when Bailey was ushered out of DC in exchange for Clinton Portis. Yesterday he talked some about that experience.

Wonder if Dan Snyder will be watching with just a twinge of regret.
Hunker'd Down by Bernie at 11:03 AM

Because we all just need a good laugh

It's been an angry day. There was Chadddd Scott getting his panties bunched up over Spencer Hall's history lesson. There was the Syracuse coach getting bitch-slapped over comments about two inches. Katie Nolan came to Regis Philbin's defense and ripped Rick Reilly a new one. Hard.

And then of course there's a lot of hostility in the city of Atlanta itself. Understandably. So I think we all need to take a deep breath and then take just a moment to smile. Laugh even, if you must.

Now. Back to your regularly scheduled hate...

Email ThisBlogThis!Share to TwitterShare to FacebookShare to Pinterest
Dawg Tags: as seen on YouTube, idiots not named Terence, neither red nor black

Emerson helps to lay out where the UGA admin stand on adding additional support staff for Richt and the football program. There's really no question that McGarity intends to go strictly by the book. (And really, what could you expect him to say?)

But this part I think cuts to exactly where we are:

“Any position that we have here needs to be justified,” McGarity said. “You don’t add a position just because so-and-so has 10 more than you do. You don’t just add it to keep up with your competition. What are these people gonna do? Discuss their role, and then you go from there. And that’s across the board for any sport here, and any position. There’s got to be a justification process, and there can’t be School A has this, and you don’t have that. ...
“If you’re living in a comparative world, it’s a hard place to be. Tell us what you need, we’ll provide that, and then we’ll move forward."

I'm not so sure how hard it is to be in a "comparative world". But it's clear that the onus is in the head coach to not only ask for what he needs, but also justify their desk space in Butts-Mehre. And the justification may be as simple as the fact that the idea of extra hands on deck is working in places like Alabama and Auburn.

And before everyone jumps to the "Richt needs a special teams coach!!", read the whole piece. Sounds like that may take care of itself. But like with the support staff, they'll go strictly by what the NCAA dictates.
Hunker'd Down by Bernie at 4:41 AM

The repugnance of the recruiting game (epilogue)

So, I'm not saying that I won't have an occasional post on something involving recruiting. I'm just forcing myself to operate in actual facts, the black and the white. The gray area of "commitments" and "offers" and who is a lean and who is not...that's just unnecessary drama.

I do believe in analyzing and (when appropriate) criticizing Georgia coaches' recruiting trends. As commenter Joseph Fain helped to point out the other day, our recruitment of offensive linemen has been an ongoing problem for a decade now. That's fact, and worthy of continued exploration. Just as celebrating a new class is on the first Wednesday each February.

Beyond that, I'm staying clear of the pit of despair. There's just too much showmanship on that side of the line where the names of good young men are treated simply as pawns. In the recruiting game anonymity is cheap and the vitriol it creates is distasteful. In the end it's just about a kid's own personal decision. And in today's world, that decision is only final on the first Wednesday in February.

Seems a waste to worry over anything before then. I mean, Willie Williams spent more time tackling plates of lobster (and marijuana) than he did running backs.


The recruiting game will go on into perpetuity. But it will do so without my words
adding even one innocuous whiff of propane to its furious blaze.
Hunker'd Down by Bernie at 1:05 PM

Email ThisBlogThis!Share to TwitterShare to FacebookShare to Pinterest
Dawg Tags: A Confederacy of Dunces, Dawg Recruiting, phone lines are open

Have been enjoying the extra publicity for Champ this week. Hope he's being talked about even more the week after the Super Bowl. Bailey has always kept a close eye on things around Athens, so it's nice that DawgNation can return the favor on the game of football's biggest stage.

Read a nice piece in Sports Illustrated this week. It was really well done and went into Champ's history in the league: playing with and learning from Darrell Green in Washington, his stellar career setting a record for Pro Bowls among cornerbacks (he's been to 12 in 14 years), his injury and how he's adjusted to his role as a nickelback...with the help of his brother Dawg, Boss:

I'd link to the article, but it's not online as far as I can tell. Hopefully you've got a copy. It shows Champ as the skilled, smart and ultra-talented team player we grew to love during his time in Athens.

Also, with the help of Jim, found this article that is online. More great stuff that talks about Bailey's role and especially how he's come full circle as an NFL corner like his former mentor Green. This part is fantastic: